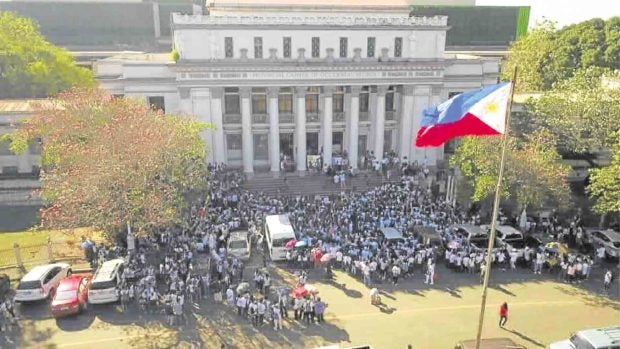 YOUTH SUPPORT A coalition of youth organizations and environmental advocates in Negros Occidental assembles on March 6 at the provincial capitol to press for an ordinance to give a coal-free declaration the force of law. —CLAUDIA GANCAYCO/CONTRIBUTOR

BACOLOD CITY — A coalition of five youth groups in Negros Occidental expressed support for a decision to declare the province off limits to coal power plants and press for the passage of a measure that would give the declaration the force of law.

Youth for Climate Hope (Y4CH) said although Gov. Alfredo Marañon Jr.’s executive order declaring the province to be coal-free was not law, it was a “strong policy statement.”

The governor’s policy, the group said, could translate into stronger ordinances.

“This is only the beginning,” said Krishna Ariola, 21, one of the leaders of Y4CH.

“We will continue to fight” until Marañon’s executive order becomes an ordinance, she added.

The group has been holding protest rallies outside the provincial capitol in Bacolod City every Wednesday since Feb. 13.

It timed the rallies for regular sessions of the provincial board to press the local lawmaking body to pass a law against the construction of coal-fired power plants in Negros Occidental.

The group rejoiced when Marañon, who was serving his last term as governor, signed Executive Order No. 19-08 which declared that the province would continue to pursue clean and renewable energy projects and oppose the entry or establishment of any coal-fired power plant.

Ariola said the province didn’t have a single coal plant but has several sources of renewable energy such as solar plants in the cities of Cadiz, San Carlos and La Carlota.

“We aim to keep it that way,” Ariola said.

“We can be a model province” for renewable energy in the country, she said.

Ariola added, though, that such a dream could come true only if the government and the private sector invested in renewable energy technology and upgraded the province’s power transmission lines.

She also called on the youth in the province to support the call for clean sources of energy.

“We are all in this together. Let’s not wait for the day when it becomes too late to act,” Ariola said.

“While we’re still here, and while we still can, we should use our voices, our skills and our intellect to demand justice for our communities,” she added.