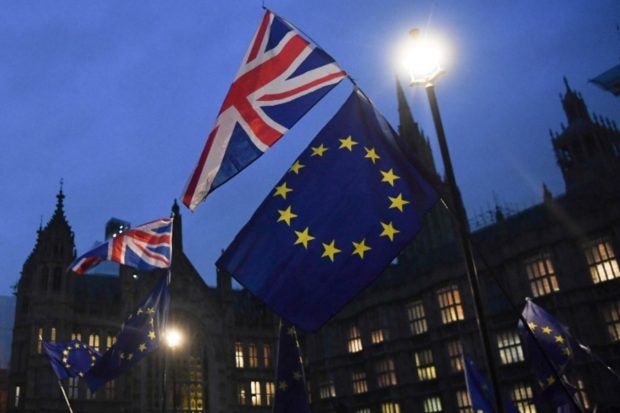 Protesters with Union Flags and EU flags are seen outside the Houses of Parliament in central London on January 15, 2019.  (Photo by Paul ELLIS / AFP)

LONDON — British MPs will on Tuesday vote again on Prime Minister Theresa May’s Brexit deal, making the historic decision whether to back her plan or risk a chaotic exit from the EU in less than three weeks time.

Two months ago, the House of Commons rejected the withdrawal agreement by a huge majority, and sent May back to renegotiate.

EU leaders have rejected her demands, however, and talks between British and EU officials have failed to secure a breakthrough.

If they fail to approve a deal and if no extension is negotiated, Britain would have to leave the European Union after 46 years of membership on March 29, causing huge disruption on both sides.

Discussions at official level continued this weekend on some kind of legal guarantees that might persuade MPs to back the deal. May is poised to make a last-minute visit herself if needed.

But few expect any major concessions before Tuesday’s vote, and the prime minister instead has sought to remind MPs of the stakes involved.

She warned in a speech Friday that rejecting her deal again would create a “moment of crisis”.

“Back it and the UK will leave the European Union. Reject it and no one knows what will happen,” she said.

“We may not leave the EU for many months. We may leave without the protections that the deal provides. We may never leave at all.”

A threatened cabinet revolt over the risks of a no-deal Brexit forced May to agree that, if her deal is defeated again, MPs will be able to vote on both a “no deal” option or a delay to Brexit this week.

Speaking in Grimsby, a North Sea fishing port that voted to leave the EU in the 2016 referendum, May asked Brussels for “one more push” to get an agreement.

“The decisions that the European Union makes over the next few days will have a big impact on the outcome of the vote,” she said.

Their talks are focused on the so-called backstop, an arrangement in the Brexit deal intended to keep open the Irish border.

It would keep Britain in the EU’s customs union and parts of its single market until and unless another way — such as a trade deal — is found to avoid frontier checks.

Many MPs fear a trap to keep them tied to EU rules, but Brussels has rejected calls for a time limit or unilateral way out of the arrangement.

EU chief negotiator Michel Barnier repeated on Friday that the bloc could offer a legally binding statement confirming the backstop was only meant to be temporary.

May’s deal was rejected by a majority of 230 votes in January, and although a few MPs have come onside, there is no sign yet of a major shift in opinion.

The main opposition Labour party still opposes the deal, even while May has been wooing individual MPs with promises of protection for workers’ rights and new funds for poor towns.

If the deal is rejected on Tuesday, MPs are expected to vote against a “no deal” exit on Wednesday, paving the way for a vote on delaying Brexit on Thursday.

May is offering the possibility of a “short, limited” delay, but is herself opposed, warning that eventually MPs will have to make a decision about Britain’s future.

Any delay would have to be approved by the other 27 EU leaders, who are next meeting at a Brussels summit on March 21/22 — a week before Brexit day.

Senior Labour MP Emily Thornberry told The Times on Saturday that her party would back a short delay to Brexit, but not beyond July.

Labour has held out the possibility of backing a second referendum that might reverse Brexit.

But Thornberry rejected speculation that it would back a plan to agree to May’s deal on the condition of holding a public vote.