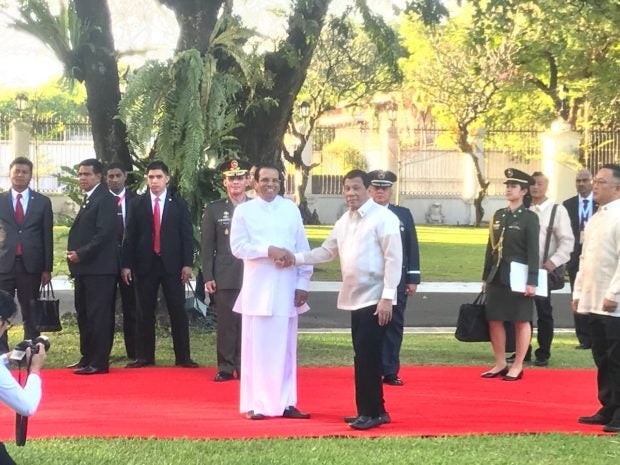 COLOMBO, Sri Lanka — Sri Lanka’s military is teaming with police to invigorate an anti-narcotics drive by its president who has vowed to end a 43-year moratorium on capital punishment and execute condemned drug traffickers, top military officials said Friday.

The announcement comes as Sri Lanka is facing growing criticism from rights groups and countries including Great Britain, as well as the European Union, after President Maithripala Sirisena declared that executions will resume in the next two months for convicted drug traffickers.

Sirisena has taken police under his command and vowed to be tough on drug offenders, modeling his country’s drug fight after the Philippines.

Sirisena visited the Philippines in January and praised President Rodrigo Duterte’s drug crackdown as “an example to the world.” Thousands of suspects have been killed since Duterte took office in 2016, and rights groups have denounced the killings as extrajudicial executions.

“Use of narcotic drugs has become a serious menace across the country,” said Army commander Lt. Gen. Mahesh Senanayaka. He said that since the military alone is not permitted to conduct raids and arrests, the soldiers would team with police and excise officials to crackdown on narcotics and arrest drug peddlers.

On Friday, he told reporters the military will share intelligence information with police and assist them in conducting raids on narcotics across the country.

Navy commander Vice Admiral Piyal de Silva said officials have found that majority of the drugs enter the country mostly in fishing boats and therefore, the Navy has been conducting enhanced search operations.

“Most of those arrested are fishermen,” Silva said, adding that the Navy now conducts frequent searches of fishing boats.

Police have intensified efforts to crack down on drugs and they seized 294 kilograms of heroin last month, the largest ever narcotics haul in Sri Lanka.

Sri Lanka is predominantly Buddhist, a religion that advocates non-violence. Sirisena has said while the country has had positive influences from all religions, tough law enforcement is necessary to curb crime and maintain order.