Harsher war on drugs shows its face in Cebu 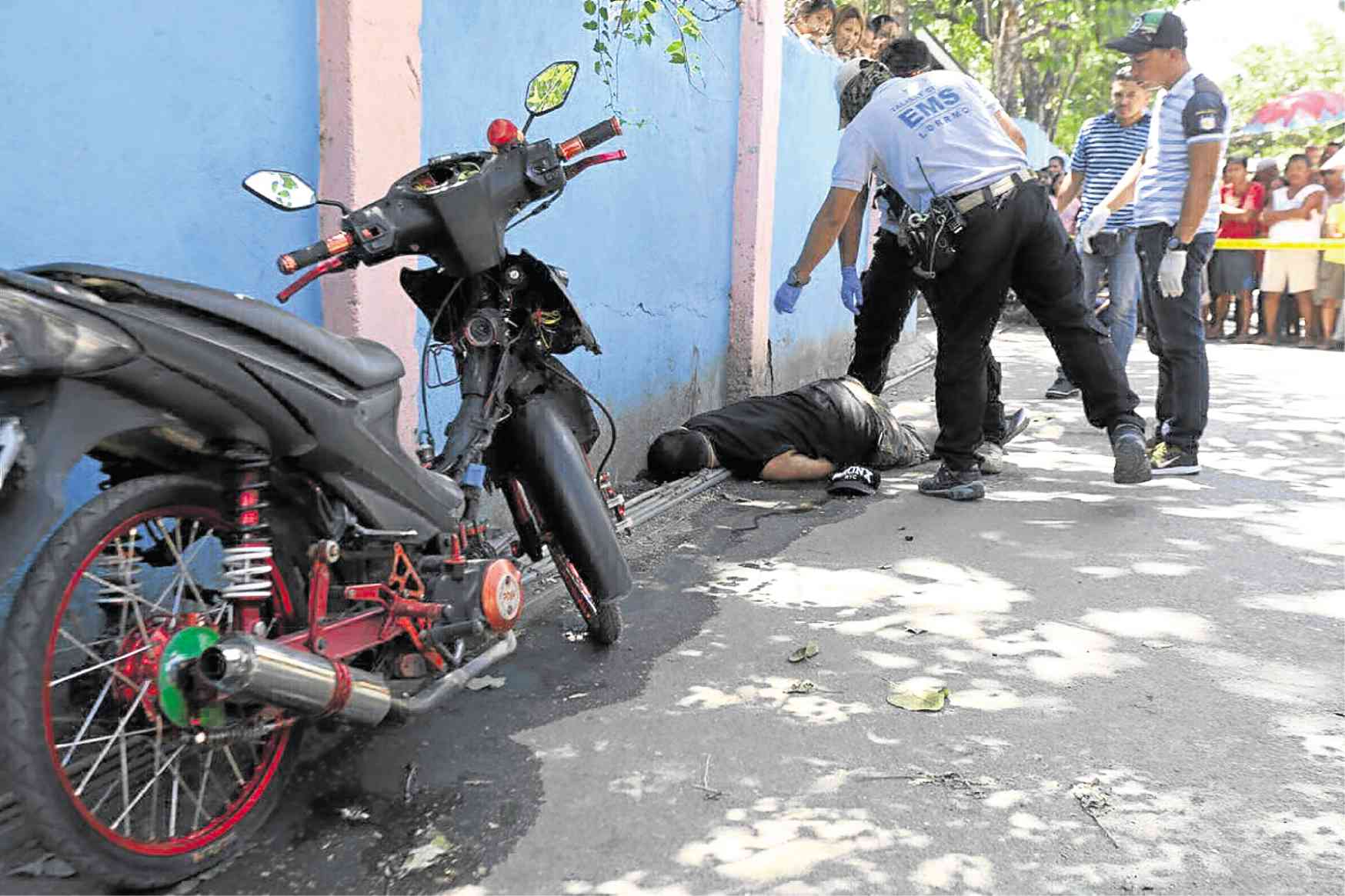 FAMILIAR SIGHT Police and forensics officers examine the body of Jason Narrido, who was shot dead after dropping off his son at school in Talisay City on Friday. —JUNJIE MENDOZA

CEBU CITY — President Duterte was not joking when he said that the last three years of his administration would be dangerous for those involved in illegal drugs.

Less than a week after he issued the warning during his visit in Cebu on Feb. 24, 10 people had been killed—all gunned down by still unknown assailants.

The latest fatality was Jason Narrido who was shot dead after dropping off his son at San Isidro Elementary School at Barangay San Isidro, Talisay City, Cebu, on Friday morning.

Police, however, have yet to determine if the killing was drug related but noticed that the victim’s motorcycle had a sticker of the Philippine National Police.

After dropping off his son at school, he stopped by a vendor to buy a pack of juice when an unidentified man wrapped his arm around him and shot him in the head and body.

The assailant’s companion warned bystanders to stay away. The two sped off on their motorcycle.

Narrido’s death came two days after three people, including a policeman, were shot in separate occasions in Cebu.

The victims were suspected to be involved in drugs.

Police Chief Master Sergeant Mikee Espina was standing at the terrace of his house at Barangay Dumlog when he was shot around 11 a.m.

No one saw the gunman but Talisay City police investigator Glenn Besande said the assailant was believed to be on board a white van and used a sniper rifle in shooting the victim.

Witnesses said a heavily-tinted white van was roaming the area before the shooting.

Espina was assigned to Talisay until 2016, when he was reassigned to Masbate after he was linked to drugs, according to Cebu provincial police spokesperson Eloveo Marquez.

No case had been filed against him.

About an hour after the killing in Talisay, 34-year-old Neil Benjamin Yap was ambushed by two men on a motorcycle while driving his Hyundai Eon in Mandaue City.

Police said the businessman was on a police matrix of suspected ecstasy dealers.

Julian Entoma, Mandaue City police chief, said Yap had been arrested for selling ecstasy in a buy-bust operation in January last year. He was out on bail.

At 7 p.m. on the same day, another shooting happened in Mandaue City.

Janelyn Encila had just disembarked from a taxi on her way home when shot by motorcycle-riding assailants at Barangay Labogon, Mandaue.

Janelyn, 31, was the younger sister of Jocelyn who was arrested, along with their parents, on Sunday for involvement in a drug syndicate led by New Bilibid Prison inmate Rustico Ygot.

Entoma said Janelyn came from a police station to report being tailed since the arrest of her parents and sister.

Entoma said she sought “protection from the police” although the family suspected that the persons who had been tailing her were policemen.

The Mandaue police chief said Janelyn, too, was part of the Rustico Ygot drug group.

She supposedly facilitated the distribution of drugs and sent money from the drug sale to Ygot.

“We suspect that she was killed by fellow members of the syndicate after she was deemed useless and may squeal on syndicate’s activities after the arrest of her parents and sisters,” Entoma said.