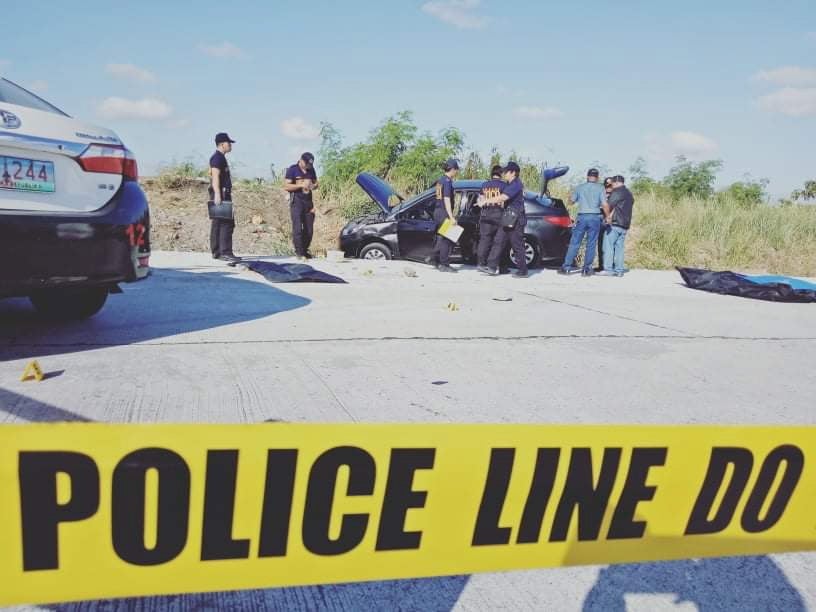 NEUTRALIZED Four suspected car thieves were killed in a shootout with operatives of the Philippine National Police–Highway Patrol Group in Muntinlupa City on Friday.—Richard Garcia

Four suspected car thieves were killed after they allegedly engaged the Philippine National Police-Highway Patrol Group (PNP HPG) in a car chase shootout in Muntinlupa City before dawn on Friday. The PNP-HPG said the Hyundai Accent with conduction plate number MP 0669 that the slain suspects were in was the subject of a “flash alarm,” or was earlier reported stolen, prompting HPG operatives to flag them down. The police claimed that “instead of yielding,” the car occupants opened fire at the police and fled, leading to a running gunbattle “until the suspects were cornered and eventually neutralized” at Don P. Reyes Avenue in Southville 3, Barangay Poblacion. The suspects remain unidentified as of press time. PNP spokesperson Col. Bernard Banac said the HPG was still  investigating the veracity of police IDs and uniforms recovered from the slain suspects.—Jaymee T. Gamil

BAGUIO CITY  —Agriculture Secretary Emmanuel Piñol has packed cooking oil and other food items for a trip to Russia on Sunday where he intends to open new markets for Filipino products. A supermarket chain with 15,000 outlets operating in Eastern Europe has expressed interest in buying Filipino products, he said on Friday during a launching program for a P122-million automated greenhouse project developed by the South Korean government. “I am bringing with me boxes of cooking oil, margarine and vinegar. I will become a salesman on behalf of coconut farmers,” he said, adding: “I will carry these items myself. I will also bring along coconuts, as well as processed coconut chips and mango chips.” He said the trip to Russia, Belarus and Chechnya could help local food producers penetrate Eastern Europe, which he described as a “huge market.”—Vincent Cabreza

The Commission on Elections (Comelec) thumbed down on Friday the request of opposition Otso Diretso for the poll body to mount a senatorial debate, citing logistical and time constraints and the danger of being seen as favoring certain aspirants in the upcoming polls. Comelec spokesperson James Jimenez said that the full commission had denied Otso Diretso’s request for a debate with the administration-backed Hugpong ng Pagbabago (HNP) since doing so was “tantamount to giving preferential treatment to some senatorial candidates or slates.” “It would be practically impossible, logistically, to conduct meaningful debates involving all 62 candidates without risking allegations of preferential treatment,” Jimenez said. Last week, Otso Diretso candidates asked the Comelec to facilitate a public debate between them and the 13 HNP candidates.—Jovic Yee