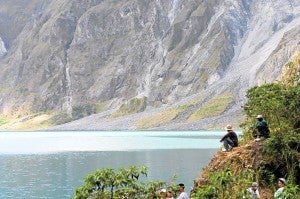 ANGELES CITY—A Department of Tourism (DOT) official has asked outdoor enthusiasts to postpone their trips to Mt. Pinatubo’s crater lake during the rainy season because heavy rains may trigger the collapse of the volcano’s crater wall.

Ronaldo Tiotuico, DOT director in Central Luzon, said he is concerned about the safety and security of local and foreign tourists trekking the volcano’s crater following an announcement by the weather bureau that several typhoons would hit the country in the coming months.

“Many other portions of the crater’s inner wall are in danger of collapsing, as indicated by huge cracks and steep slopes. Collapse may be triggered once heavy rain falls within the area,” Tiotuico said in a travel advisory.

He said if adventure seekers cannot postpone their trek to Mt. Pinatubo until October, they must “observe safety precautions,” especially if they plan to swim in the crater lake.

“In addition, thermal activities on the eastern crater lake shoreline are risky, and may cause scalding or burns upon contact. Moderate to strong wind will also affect the mobility of watercraft, like kayaks and boats, near the breached two-meter wide Maraunot outlet,” he said.

“The rule of thumb is that whenever there is a typhoon brewing, it is best to keep out of harm’s way,” he said.

The 2-km wide crater lake of Mt. Pinatubo was formed after the volcano’s eruption in 1991. It has become a popular destination due to its turquoise water that is suitable for swimming, kayaking and boat rides.

But the crater lake contains enough water to flood communities in Botolan, Zambales. In 2001, residents of Botolan villages near the volcano were evacuated after experts said the collapse of the crater wall was imminent due to accumulated rainwater that reached “dangerous levels.”

To avoid the collapse of the crater wall that year, excess water was drained from the lake through a channel dug up by Aetas, and personnel of the Department of Public Works and Highways.