In The Know: The Binondo Central Bank 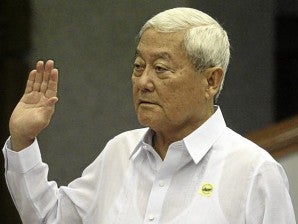 The so-called Binondo Central Bank (BCB) referred to a group of major currency traders organized in November 1983 to provide badly needed dollars to importers, traders and large corporations that acquired raw materials and services from abroad.

At the time, banks and financial institutions had scarce foreign reserves due to the crippling debt crisis that followed the assassination of Benigno Aquino Jr.

Relying on the entrenched network of Chinese-Filipino businessmen, the government organized the BCB under then Trade Secretary Roberto V. Ongpin, with a mandate to close the gap between the official guiding rate for the US dollar and the black market rate.

The official guiding rate jumped from P8 to P14 after the Aquino assassination, but the black market rate went as high as P25 as investors panicked and dollar sources dried up fast.

The BCB, through its network of small money changers nationwide reportedly came up with $7 million to $8 million a day.

The BCB was disbanded on Feb. 26, 1986, right after the Edsa People Power Revolution that toppled the Marcos dictatorship. At that time, the dollar rate was reined in at P22 from P25 at the height of the crisis.

In July 1987, government prosecutors charged Ongpin with acquiring P1,649,734 illegally through the BCB and asked the Sandiganbayan to order Ongpin to return the money, and pay P50 billion in moral damages and P1 billion in exemplary damages.

The government alleged that the Marcos couple, Ver, Ongpin and several others organized the BCB “to engage in the buying of millions of US dollars and bringing the same out of the country for deposit in foreign banks, thereby obtaining millions of dollars for themselves.”

They allegedly received the money through dummies, nominees and agents of the BCB’s financiers, “in exchange for security and protection given to said financiers, their operations, and couriers and agents.”

Government lawyers completed the marking of their exhibits in 2001, while Ongpin completed his presentation of evidence in June 2007.

In April 2009, Ongpin asked the Sandiganbayan to dismiss the case, saying the government had failed to prove that he had personally profited from the operation of the BCB or that such had caused grave and irreparable damage to the government.

He also claimed the BCB helped avert an economic disaster by stabilizing the plunging peso.

In December 2009, Ongpin filed a motion asking the Sandiganbayan to finally resolve the forfeiture case against him. Inquirer Research