MANILA, Philippines – Despite being a self-confessed womanizer and criticized for being a sexist, President Rodrigo Duterte on Friday vowed to create an “enabling environment for women to be empowered.”

In his International Women’s Day message, Duterte called for the proper implementation of the Magna Carta for Women in government, which seeks to eliminate discrimination against women.

“This important occasion reminds us all to pave the way for an enabling environment for women to be empowered and to make sure that the Magna Carta for Women is properly implemented at all levels of government,” he said. 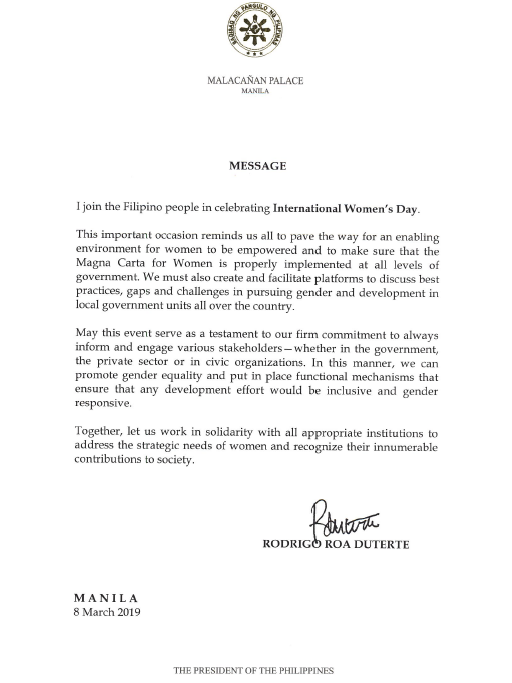 “We must also create and facilitate platforms to discuss best practices, gaps and challenges in pursuing gender and development in local government units all over the country,” he added.

The President said Women’s Day should “serve as a testament to our firm commitment to always inform and engage various stakeholders—whether in the government, the private sector or in civic organizations.”

“In this manner, we can promote gender equality and put in place functional mechanisms that ensure that any development effort would be inclusive and gender responsive,” he said.

“Together, let us work in solidarity with all appropriate institutions to address the strategic needs of women and recognize their innumerable contributions to society,” he added.

In a statement, Presidential Spokesperson Salvador Panelo said the Duterte administration “has been at the forefront in advancing women’s rights in the Philippines.”

He then cited the World Economic Forum (WEF) Global Gender Gap Report 2018, which placed the Philippines as the most gender equal nation in Asia and ranked it as the 8th in the list of best countries in the world to be a woman.

He also cited laws signed by the President that promote women’s rights in the country. He mentioned Republic Act (RA) No. 11210, which increases maternity leave period for all female workers to 105 days; RA No. 11165 or the Telecommuting Law, which he said created “an alternative work arrangement that most Filipino women may take advantage of”; and RA No. 11148, “which ensures the health safety of both mother and child in the early stages after giving birth.”

The Palace official also noted Executive Order No. 12 to “attain and sustain ‘zero unmet need for modern family planning’ through the strict implementation of the Responsible Parenthood and Reproductive Health Act” as well as the recently approved “full and intensified Implementation Plan for the National Program on Family Planning.”

“Such executive action and legislative initiatives,” he said “would hopefully improve the ranking of the Philippines in terms of women’s safety by Singapore-based research company ValueChampion, which considers women’s access to health care, lax laws regarding women’s safety, poor access to family planning resources and overall gender inequality in its list of safest countries in Asia Pacific for women.”

“(Duterte) believes in the capability, integrity and competence of women as he has appointed several of them in high-level positions where they get the opportunity to contribute in significant decision-making for the country,” he said.

“Indeed, we continue to honor all Filipino women and give due recognition to their achievements in the home, in the workplace, in the community and in nation building,” he added. /muf/kga