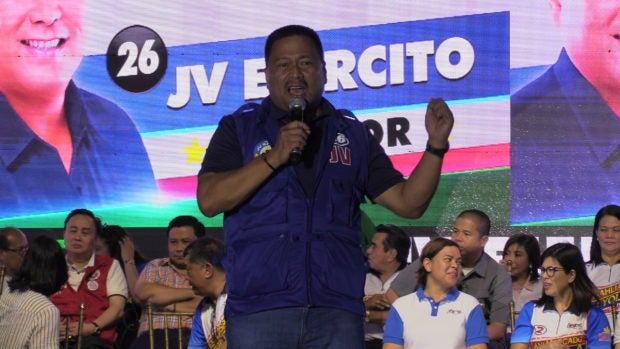 MANILA, Philippines — Everybody lies? Senator JV Ejercito said he does not lie as he asserted that “public office is a public trust.”

Unlike others, Ejercito said he does not lie just just to get the votes of the people and get elected in office.

“I don’t know because it doesn’t concern me. Kasi ako hindi naman ako nangsisinungaling so I can’t react on that,” he said during the Kapihan sa Senado.

The senator was reacting to Davao City Mayor Sara Duterte-Carpio’s remark that “honesty should not be an issue” since all candidates have been telling lies anyway.

Duterte-Carpio made the statement as he was defending Hugpong ng Pagbabago (HNP) senator bet Bong Go from allegations that was using government resources in his campaign.

“They deliberately say false statements on stage about and against the administration of President Duterte. So lahat sila sinungaling. Lahat ng tao sa mundong ito, sinungaling (So they are all liars. Everybody lies),” she said on Wednesday.

But Ejercito said the presidential daughter was just probably referring to candidates who have been making promises just to win the elections.

“Siguro nasabi lang ni Mayor Inday Sara ‘yun because in the political season, everybody tries to get votes. So marami talaga dyan [who] would say anything just to get the votes. Marami talaga nambobola dyan; they are just being politicians,” he said.

“But for me, again, I’ll go back to the basic fundamentals: Public office is a public trust,” said Ejercito, who is seeking another term in the upcoming senatorial race.