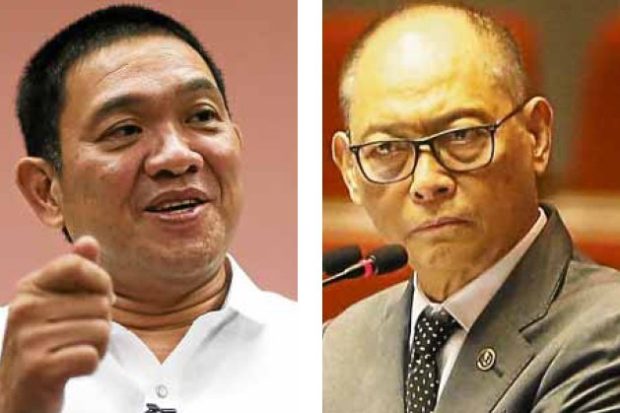 MANILA, Philippines — Rep. Rolando Andaya Jr., the House appropriations committee chairman, seems to have backed off, at least temporarily, on his bid to investigate outgoing budget chief Benjamin Diokno over alleged insertions in the 2019 national budget.

In a press briefing on Wednesday, Andaya said the investigation of Diokno might be pursued by “some other person, some other time.”

Earlier this year, during an inquiry into alleged anomalies in the national budget, Andaya said that Aremar Construction Corp, which is owned by Diokno’s in-laws, partnered with CT Leoncio Construction and Trading and other companies to bag several contracts from the Department of Public Works and Highways (DPWH).

On Wednesday, he was asked if had been able to get the bank transaction records of CT Leoncio and Aremar that he had asked from the Anti-Money Laundering Council (AMLC).

“I don’t think now is the time,” he replied. “Babalik din naman yan.”

[But we can return to that.]

Diokno, who served as the secretary of the Department of Budget Management for nearly three years, was recently appointed by President Rodrigo Duterte as the new Bangko Sentral ng Pilipinas (BSP) governor.

The BSP has overseeing powers over AMLC.

Andaya, who has been chasing Diokno over alleged insertions in the budget, said that pushing for an inquiry would not be possible right now.

“Na-transfer na eh… okay na iyon. I think I personally have learned so many lessons from that experience. So, some other time, some other person,” he said. /atm