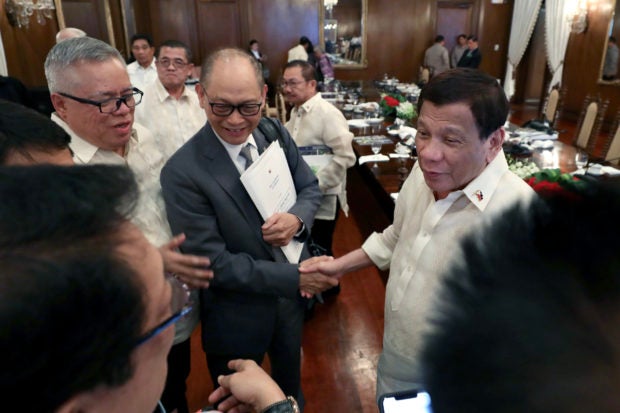 President Rodrigo Roa Duterte is seen huddled together with newly-appointed Bangko Sentral ng Pilipinas Governor Benjamin Diokno and other members of the cabinet on the sidelines of the 35th Cabinet Meeting at the Malacañan Palace on March 4, 2019. RICHARD MADELO/PRESIDENTIAL PHOTO

Business groups on Tuesday were surprised but welcomed Budget Secretary Benjamin Diokno’s appointment as the new governor of the Bangko Sentral ng Pilipinas (BSP), saying his long experience as a public servant and economist would be assets in his new role as guardian of the country’s monetary system.

“We are confident that the BSP, under Governor Diokno, will continue to promote good governance and transparent policies in the financial system,” the Management Association of the Philippines said in a statement.

Diokno is a “very experienced public servant” who could bring “new ideas to the banking system,” said Francis Chua, chair emeritus of the Philippine Chamber of Commerce and Industry (PCCI).

“He can also create dramatic changes to the system,” Chua said.

Diokno will succeed Nestor Espenilla Jr., who died of cancer last month, and will serve the remainder of the late BSP chief’s six-year term until mid-2023. His appointment will have to be confirmed by the Commission on Appointments.

Budget Undersecretary Janet Abuel will be officer in charge of the Department of Budget and Management (DBM).

Diokno has “repeatedly demonstrated the ability to run a large, complex organization with intellectual leadership and a steady hand,” he said in a text message to reporters.

“His competence is unquestionable, owing to his deep expertise in macroeconomics and extensive senior management experience in government and the private sector,” Dominguez said.

Former Finance Secretary Jose Pardo, who had served with Diokno in then President Joseph Estrada’s Cabinet, said, “His credentials for competence and integrity remain impeccable.”

The Bankers Association of the Philippines (BAP)—which is composed of the country’s largest banks—said it was supporting Diokno.

“The BAP is optimistic that the reformist brand of leadership of the new BSP governor will pave the way in continuing the necessary reforms and policies to strengthen the Philippine banking industry,” BAP said in a statement.

The Shareholders’ Association of the Philippines (SharePHIL) said it expected Diokno to continue the sound monetary policies espoused by his predecessors, Amando Tetangco Jr. and Espenilla.

Diokno “ably demonstrated his capacity and courage to withstand pressure which bode well for maintaining the independence of the Monetary Board and the BSP,” said Francis Lim, SharePHIL president.

He was referring to the grilling that the budget chief had undergone during a congressional hearing on controversial insertions in the proposed 2019 budget of the Department of Public Works and Highways (DPWH).

The UK-based think tank Capital Economics, however, said “the surprise pick of Diokno as [BSP] governor may raise questions about the bank’s independence in the future.”

Asia economist for Capital Economics, Alex Holmes, said that as inflation further slowed to 3.8 percent in February and returned within the government’s 2-4 percent target range, “the BSP will be in a position to start cutting rates as soon as next quarter.”

“Mr. Diokno’s relaxed attitude to fiscal deficits as budget secretary suggests he will be dovish as governor. We have been expecting a rate cut at BSP’s meeting in May for a while, and this news makes that more likely,” Capital Economics said.

It said the choice of a governor who did not come from the ranks of the BSP itself “raises questions about the politicization of the BSP.”

“There is a risk that markets ultimately become less confident in the BSP’s independence and willingness to tackle inflation and financial risks,” it added.

Diokno’s initial statements about how monetary policy should align with fiscal policy and his seeming belief that price stability was just one of the mandates of the BSP have sent mixed signals.

But Alex Escucha, senior vice president and investor relations chief at China Bank, said Diokno’s recent statements should not be interpreted to mean he would proceed headlong into policy rate cuts and reductions in reserve requirements.

“He is quite conscious that a steady hand on the wheels of monetary and price stability is the primary foundation of sustainable economic growth,” Escucha said.

Opposition lawmaker and ACT Teachers Rep. Antonio Tinio said Diokno’s appointment might be intended to shield him from lingering questions about pork in the still-unsigned 2019 budget, citing the former budget chief’s alleged insertion of P75 billion worth of projects for favored contractors and relatives.