Cops show how to beat pickpockets at festival 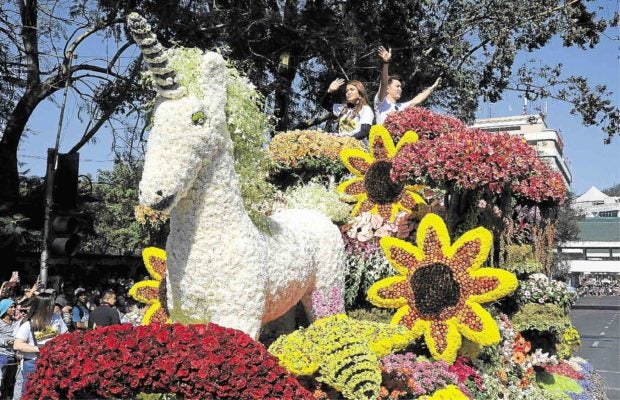 Simulating what airline attendants or cabin crew do to demonstrate safety tips on a flight, Sarmiento pulled out a backpack and showed how it should be strapped around the chest to protect personal belongings.

“Embrace your bag like it is your ‘forever,’” Cpl. Brishelle Balinte, using the sound system of a patrol car, said in Filipino, drawing laughter from the crowd.

Baguio police officers were tasked with sharing safety tips, as part of an information drive against petty crimes during the festival season, especially on pickpocket.

But Balinte and Sarmiento decided to improvise, and had become online stars in their own right during the weekend event.

Before they joined the police force, they were members of a theater group at Saint Louis University (SLU) here. Balinte graduated with a Bachelor of Science degree in Psychology while Sarmiento completed a BS Finance Management degree.

“We grew up together. We were both schooled at SLU from elementary to college,” Balinte said.

Both agreed that there was a better way to encourage people to be more conscious about their safety during public events. Although the tips they shared were from a police manual, the two policemen sprinkled their reminders with amusing banter.

“Your wallet — which is thick because it is filled with listings of all your debts — should be tucked in your front pocket,” Balinte said, adding, “I don’t understand why you keep your wallet in your back pocket.”

Sarmiento, who was introduced as the “Robin Padilla of the Baguio City police,” demonstrated how his mobile telephone fit into the same front pocket, when Balinte said, “We all know your telephone is expensive. You want to show it around. But after you take your selfie, put it in your front pocket so you don’t lose it.”

Balinte said their skits were presented for the first time to the public during the Panagbenga parades. 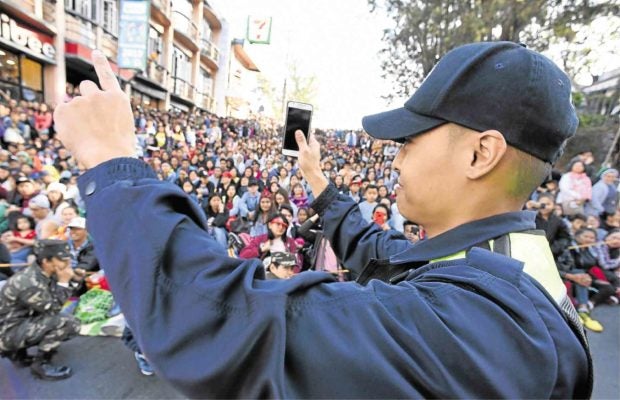 ON DUTY Patrolman Elyson Sarmiento demonstrates security techniques against theft before a crowd that gathered for the Panagbenga street dancing and float parades over the weekend. —EV ESPIRITU

Only one case was reported by a complainant who lost a cell phone while watching the parade. The suspect was arrested.

Sarmiento and Balinte performed their skits 13 times on Saturday and 10 times on Sunday in sections of the parade routes where most people gathered.

At the end of each performance, Balinte appealed to parents: “Please do not use the police to scare your children when you can’t stop them from crying.”