UPLB exec: No red-tagging on campus with Army presence 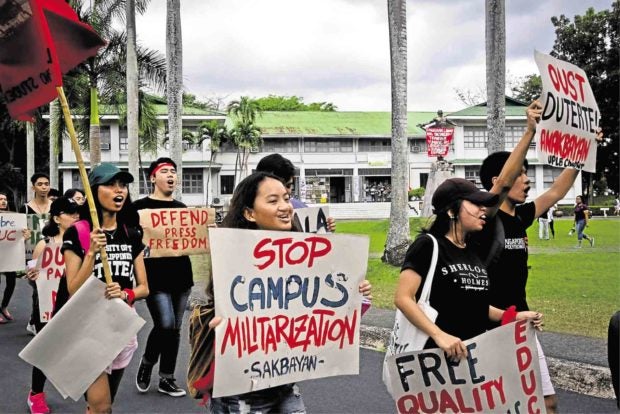 CAMPUS PROTEST A group of students at the University of the Philippines Los Baños walks out of their classes to protest rights violations under the Duterte administration. —CHRIS QUINTANA/CONTRIBUTOR

SAN PEDRO CITY — The presence of top military commanders at the University of the Philippines Los Baños (UPLB) on Monday was not meant to “militarize” or “red tag” student activists, a university official on Tuesday said.

While it had been a practice in the past to invite soldiers, she said it was the first time that Army officials of “high caliber” talked in a campus forum, attended by about 400 freshmen and sophomore students.

Lapitan, however, said the invitation had nothing to do with the death of John Carlo Alberto, a former UPLB student who died in an encounter between soldiers and communist rebels in Luisiana, Laguna, on Feb. 14.

Among the forum speakers was Maj. Gen. Rhoderick Parayno, commander of the Army’s 2nd Infantry Division.

Lapitan said Monday’s event was just a first in a series of discussions on the Reserve Officers’ Training Corps module, a track under the NSTP, a required course. She said the military, and the police, were not allowed inside UP unless they were invited by the university.

The University Student Council, in a statement, said it condemned the “red-tagging of students and organizations” when the speakers flashed pictures of protest rallies and identified them with the Communist Party of the Philippines and the NPA.

“(I)nstead of sticking to the facets of the (NSTP) module, the speakers resorted to their old, dirty tactics to silence the students … (an) obvious attack by state forces on the fundamental rights and safety of many youth activists,” said Moe Acuña, Anakbayan-UPLB chair.

He denied that students were red-tagged, but said that recent armed encounters in Southern Tagalog showed there were students among the rebel ranks.

Parayno said he also saw the opportunity to link up with UPLB officials for a proposed discussion on rebel recruitment in schools. —MARICAR CINCO