Enrile outlines the 3 defining characteristics of the Duterte presidency 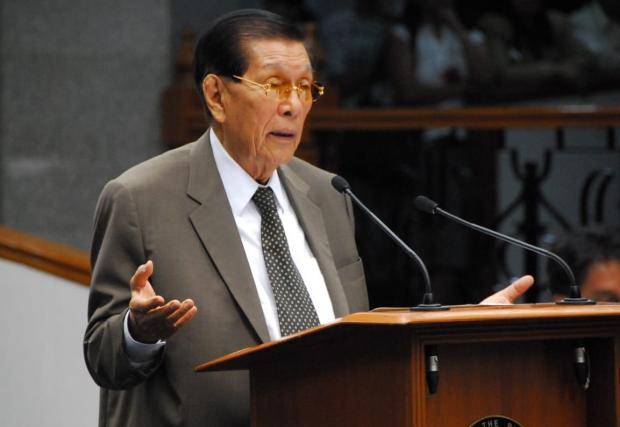 Former Senate President Juan Ponce Enrile, a senatorial candidate in the May 2019 elections, supports President Rodrigo Duterte’s handling of three key national issues — the country’s standing in the Association of Southeast Asian Nations (ASEAN), dealing with the Marawi conflict, and navigating the territorial dispute with China in the West Philippine Sea.

He shared his position with a panel of leading political bloggers in the most recent episode of “Misconsensus: The Politics of Things,” which was shared recently on Facebook and YouTube.

The theme of the episode was to show members of new media interacting with a known historical figure in Philippine politics.

Answering a question about his long political career, Enrile replied that he had served in many government functions “from ’66 to 2016.”

“I’m still mobile, still fairly lucid,” he said when questioned about his age, even as he quickly fielded numerous questions during the episode, particularly about President Duterte’s performance thus far.

“What is the oath of the President?” he asked the bloggers in turn. “It is to protect and defend the Constitution, to execute the laws of the land.”

Enrile stressed that this was exactly what President Duterte was doing in dealing with different national issues.

These include imposing martial law in Mindanao as a response to the Marawi conflict. In his view, martial law is provided for in the Constitution as a tool to be used “by any president at any time to maintain peace and order.”

”I respect the judgment of the President. We have to guard against the Islamist radicals of Saudi Arabia who establish religious schools or madrassas in Mindanao,” Enrile warned. “Saudi Arabia practices the most puritanical form of Islam, or Wahhabism. We now have very radical philosophers and teachers of Jihadism here; the same problem exists in Europe and in the US. It will be a long campaign to eradicate them.”

“It’s either we believe in the system [of government] or not. If we believe in democracy, we have to accept the process,” he added. “Here is a guy [Duterte] willing to be antagonized and maligned as he enforces the law. Most other presidents would just play ball.”

He also agreed with President Duterte’s current handling of Chinese incursions into the West Philippine Sea, as well as his coordination efforts with other ASEAN members regarding the dispute.

Duterte has also spearheaded the “ASEAN Plus One” strategy in redefining the region’s larger relationship with China.

Enrile made clear his position on the issue.

“We do have a right to the territory guaranteed by the UN and the International Arbiter Body,” he said. But he questioned the Philippines’ “capacity in enforcing that right.”

“We have two options — raise an army or negotiate,” Enrile said.

He questioned the feasibility of the first option because it would “cost us money and lives.”

And he added: “Even if we win, it could cost us ruin.”

Instead, he offered a better option – that is, to negotiate.

“They [China] are willing to talk to us. We could jointly explore the area for resources,” he said. “There are always stronger and weaker nations. Unfortunately, we presently belong to the second group.”

The bloggers joining Enrile for the discussion are positioned on a wide range of the political spectrum.