Man shoots himself in penis with unlicensed gun| Inquirer News 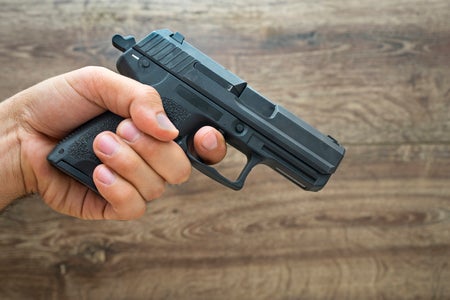 A man from Indiana, United States accidentally shot himself in the penis with his own gun, which was later found to be unlicensed.

The local Marion Police Department said in its Facebook page that they met with 46-year-old Mark Anthony Jones last Thursday, Feb. 28.  The man was in the Marion General Hospital emergency department that day, due to a self-inflicted gunshot injury.

Police said that Jones was walking in a walkway when his Hi Point 9 millimeter gun “began to slip” in his waistband.

Jones tried to reach down to adjust the gun, but it accidentally discharged, with the bullet entering “just above the penis” and exiting in his scrotum.

However, authorities found that Jones does not have a handgun license in Indiana. His case was submitted to the Grant Co. Prosecutors Office for review.

This was not the first time a man unintentionally shot himself in the penis. Back in December, a mechanic in Ilocos Sur was in the same situation when he accidentally fired his gun that was tucked in his waist, as he was supposed to urinate outside his house. JB

Man accused of hammering ice pick through another man’s penis