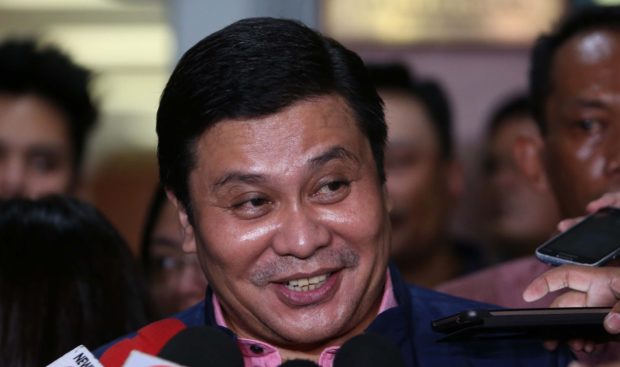 Former Sen. Jinggoy Estrada was an “active participant” in the multibillion-peso pork barrel scam who was confirmed to have received P70.7 million in alleged kickbacks by the Anti-Money Laundering Council (AMLC), state prosecutors said in a court pleading made public on Monday.

In a nine-page comment dated Feb. 27, the Ombudsman’s Office of the Special Prosecutor asked the Sandiganbayan Fifth Division to reject Estrada’s motion for leave to file a demurrer to evidence, which would allow him to seek the outright dismissal of his plunder case.

Estrada, out on bail since September 2017, is seeking to return to the Senate through May’s midterm elections, along with two of his coaccused and fellow former senators, Ramon “Bong” Revilla Jr. and Juan Ponce Enrile.

Revilla was cleared of plunder in December while Enrile is also out on bail on humanitarian grounds.

The prosecution argued, among other things, that it had sufficient evidence to prove that Estrada committed plunder of public funds in a conspiracy with businesswoman Janet Lim-Napoles.

The prosecutors cited an AMLC report disclosing “bank/financial transactions were made by Estrada, by himself or either through Pauline Labayen, Carl Dominic Labayen and Juan T. Ng, within 30 days from the dates mentioned in DDRs (daily disbursement reports) and the summary of rebates.”

“Such verification and confirmation by the AMLC is nothing less than corroborative to the testimony on record that indeed Estrada received kickbacks/commissions, therefore amassing, accumulating and acquiring ill-gotten wealth,” they added.

The state prosecutors also said they were able to prove that Estrada “accumulated ill-gotten wealth” amounting to at least P55.8 million, a computation that the court itself made when it previously denied Estrada bail in January 2016.

But the antigraft court later reversed that ruling and allowed the senator to post bail in September 2017. In the same ruling, it denied Estrada’s motion to dismiss the case.

The son of Manila Mayor Joseph Estrada is accused of plunder and 11 counts of graft for pocketing P183.79 million from his Priority Development Assistance Fund allocation from 2004 to 2010 in the wide-ranging scheme allegedly masterminded by Napoles in collusion with several lawmakers.

In their pleading, the prosecutors also refuted Estrada’s claim that there was no evidence that he was the “main plunderer,” an argument used by the other accused in plunder cases.

“[It] is the submission of the prosecution that the text of the plunder law does not expressly require the prosecution to allege or identify or even prove the so-called ‘main plunderer’ among the coconspirators in the crime of plunder,” they said.

It was clear from the evidence that Estrada was part of a conspiracy, they added.

“Each of the conspirators is the agent of all the others. Hence, they are all equally liable,” the prosecutors said.