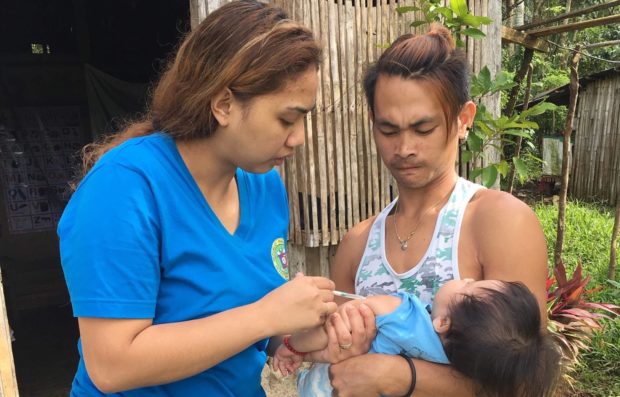 A health worker injects a child with a vaccine against measles in Kalayaan, Laguna. —(Photo from DOH Calabarzon)

MANILA, Philippines — The number of measles cases reported nationwide has climbed to 16,349 with 261 people dying after contracting the disease, as of March 2, the Department of Health (DOH) said Monday.

In the DOH Epidemiology Bureau’s latest report, a total of 1,411 measles cases were recorded from March 1 to March 2. This brings the total of cases to 16,349 from Jan. 1 to March 2.

Calabarzon registered the highest number measles cases and death, with 3,877 and 78, respectively, the report said.

It was followed by the National Capital Region (NCR) with 3,617 cases and 76 deaths.

DOH earlier declared a measles outbreak in Metro Manila and parts of Central Luzon and Central Visayas in early February as the number of cases sharply increased in those areas.

It also raised a “red flag” health alert status in Bicol due to a surge in measles cases in the region. /atm