Duterte: My last 3 years in office to be 'most dangerous' in drug war | Inquirer News
Close
menu
search

Duterte: My last 3 years in office to be ‘most dangerous’ in drug war 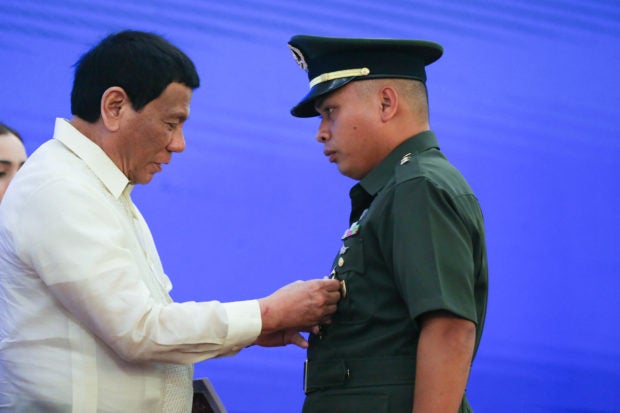 President Rodrigo Roa Duterte delivers his speech at the groundbreaking ceremony for the construction of the Isabela City Gymnasium in Basilan on March 3, 2019. TOTO LOZANO/PRESIDENTIAL PHOTO

MANILA, Philippines — Despite global condemnation on his brutal war on drugs, President Rodrigo Duterte said his last three years in office would be the “most dangerous time” in his campaign against illegal drugs.

This was not the first time Duterte made the warning as he had issued the same threat in a speech in Cebu City last week.

READ: Duterte vows to ‘wipe out’ drug gangs by end of term

“Don’t feed our children with shabu. Son of a b*tch. I will really kill you. Face to face.

And I will make I said, the last three years left, this will be the years of the most dangerous time sa term ko. I will really kill you. Stay away [from drugs]. If not, I am sorry,” he said in a speech during the campaign rally of the Partido Demokratiko Pilipino-Lakas ng Bayan (PDP-Laban) in Zamboanga City.

He remained unfazed over the complaint he is facing before the International Criminal Court (ICC).

“Do not scare me with the  International Criminal Court. That is b***s*** to me. So what if I go to jail? Go ahead. There is food there and I am already old,” he said.

As of January 2019, data from the Philippine National Police (PNP) and Philippine Drug Enforcement Agency (PDEA) showed that the total number of drug suspects killed rose to 5,176 since Duterte launched his brutal war on drugs in July 2016.

Duterte claimed that people into illegal drugs nationwide was now at about 7 to 8 million.

The President has repeatedly said that there are three million addicts in the country but clarified that the figures was only for Metro Manila.

“If you include the whole Philippines, Mindanao, Zamboanga, Davao, Cgayan…my conservative estimate, it’s about 7 to 8 million,” he added. “Now I have a problem because these 8 million Filipinos are addicted to a deadly drug called shabu which will shrink your brain and render you inutile.” /je