Sierra Leone has chosen the chimpanzee as its new national symbol as part of efforts to protect the endangered species and rebrand the country as a sustainable tourist destination. 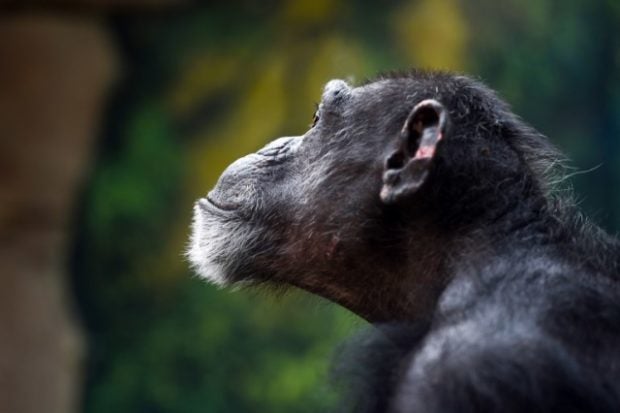 A chimpanzee looks on inside its enclosure on August 1, 2018 at The Beauval Zoo in Saint-Aignan-sur-Cher, central France. Image: GUILLAUME SOUVANT / AFP

“We share 98 percent of human genes with chimpanzees, we are all apes,” said Goodall, 84, who helped set up the country’s only chimpanzee sanctuary in the 1990s.

“Every single human being needs to make a difference on the environment to avoid the greatest danger of our future,” said the UN Messenger of Peace.

Western chimpanzees are the only critically endangered chimp subspecies. They have already been wiped out in Burkina Faso, Benin, Gambia — and possibly Togo too.

According to The American Journal of Primatology, their population plunged more than 80 percent between 1990 and 2014.

Sierra Leone is home to about 10 percent of the estimated 55,000 still living in the wild.

Poachers hunt them for their meat, farmers shoot them to protect their crops, and increasingly their habitat is being surrendered to urban development and forestry.

In addition, the deadly Ebola virus has wiped out tens of thousands of the wild apes.

Over the past 12 months, the Tacugama Chimpanzee Sanctuary — set high in the hills on the outskirts of the capital Freetown — has welcomed a record 11 orphaned chimps, as well 90 primates.

“We urge the government to unite all stakeholders to protect the only sanctuary in the country from deforestation, and human activities for the future generation,” Tacugama’s director Bala Amarasekaran said Thursday at the ceremony.

According to the government, two other sanctuaries will be opened soon.

Sierra Leone banks on wildlife conservation to help rekindle its tourism industry nearly two decades after the end of the civil war, which claimed some 120,000 lives.

“We are going to rebrand Sierra Leone as a tourism destination with chimps,” Tourism Minister Memunatu Pratt said. NVG