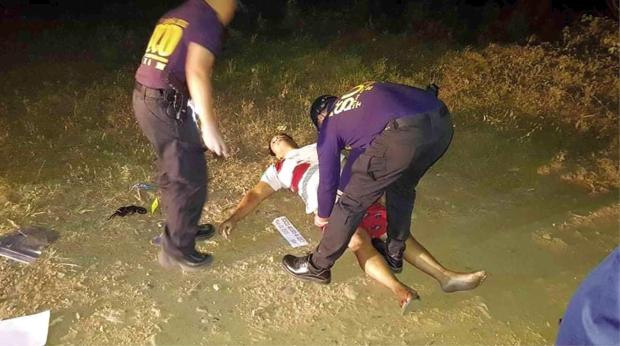 Another drug suspect lies dead in Pandi town, Bulacan province, after shooting it out with police during a drug raid. (Photo from the Bulacan Police Provincial Office)

CAMP GEN. ALEJO SANTOS, Bulacan — Eight men, most of them drug suspects, were killed in separate police operations in the province over the weekend in an apparent enforcement of President Duterte’s verbal instructions for authorities to conduct a “harsher” war on drugs.

Bersaluna said the suspects were on the police’s drug watch list and had been under their surveillance.

An unidentified man was also killed at the Commission on Elections checkpoint in Balagtas town after he reportedly engaged patrolling policemen in a shootout.

Rowell Reynon, 47, a dismissed policeman from Guiguinto town, was killed after he fired at policemen during a buy-bust operation.

Reynon was first dismissed from the service in 2001 but was reinstated in 2002. In 2010, he was again dismissed for involvement in the illegal drug trade of the so-called “Alabang Boys.”

Police also seized more than P25 million worth of suspected shabu from two women during a buy-bust operation in Baliwag town on Feb. 21.

The women, identified as Cristina Joan Webb Trinidad, 39, of San Rafael, and Ruth Francisco, 34, of Marilao town, were arrested.

Seized from them were cellphones, a weighing scale, drug paraphernalia and marked money used in the operation.

Bersaluna said the two women were not on the drug watch list and could be new but high-profile players in drug trafficking. /lzb /pdi