4 nabbed after shabu worth P190M were seized in Cebu 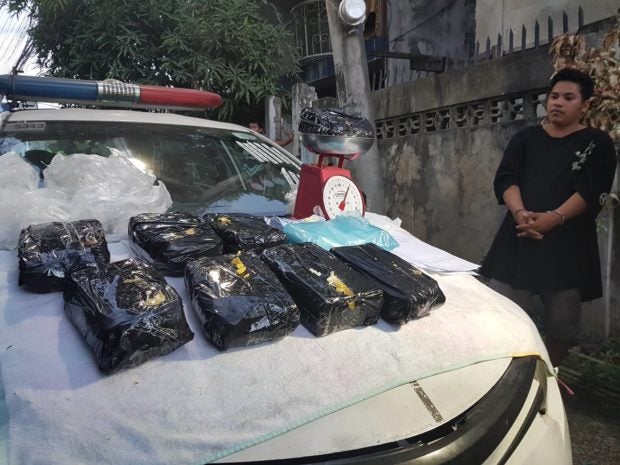 At least 18 kilos of shabu have been seized from Elymar Ancajas, 24, in a buy-bust operation in Barangay Inayawan, Cebu City. photo by Benjie Talisic, Inquirer Visayas

CEBU CITY — Four persons were arrested early on Sunday after at least 28 kilograms of illegal drugs, worth about P190 million, were seized in two buy-bust operations in Cebu City and Consolacion town, northern Cebu.

The first operation was conducted in an apartment in Barangay Inayawan, Cebu City, past 1 a.m. on Sunday where at least 18 kg of “shabu,” or crystal meth, were seized from Elymar Ancajas, 24.

The drugs were in black plastic bags mixed with garlic, apparently to prevent detection by drug-sniffing dogs.

Ancajas told police where he got the shabu, prompting law enforcers to form a team and proceed to Consolacion town, some 19 kilometers north of here.

The target of the buy-bust was Jocelyn Encila, the alleged supplier of Ancajas.

Encila transacted with an undercover agent while in a private hospital where she was confined for diarrhea.

She then instructed the undercover agent to proceed to her house at Barangay Casili, Consolacion, to pick up the illegal drugs.

According to Chief Supt. Debold Sinas, police director for Central Visayas, the agent received the drugs from Encila’s parents — Marcial and Marilyn Encila — at her house in Casili.

After receiving payment, the two were arrested. Jocelyn was placed under hospital arrest.

Marilyn said she and her husband didn’t know about their daughter’s involvement in the illegal drug trade.

But Sinas cited intelligence reports saying that the parents were part of the illegal business.

“They have a big house but they supposedly get their money from selling barbecue and charcoal,” Sinas said.

“Yet, they own three vehicles and their daughter doesn’t have a job. It is really suspicious,” he added.