A bridge too late: How to delay a gov’t infra project | Inquirer News
Close
menu
search

A bridge too late: How to delay a gov’t infra project 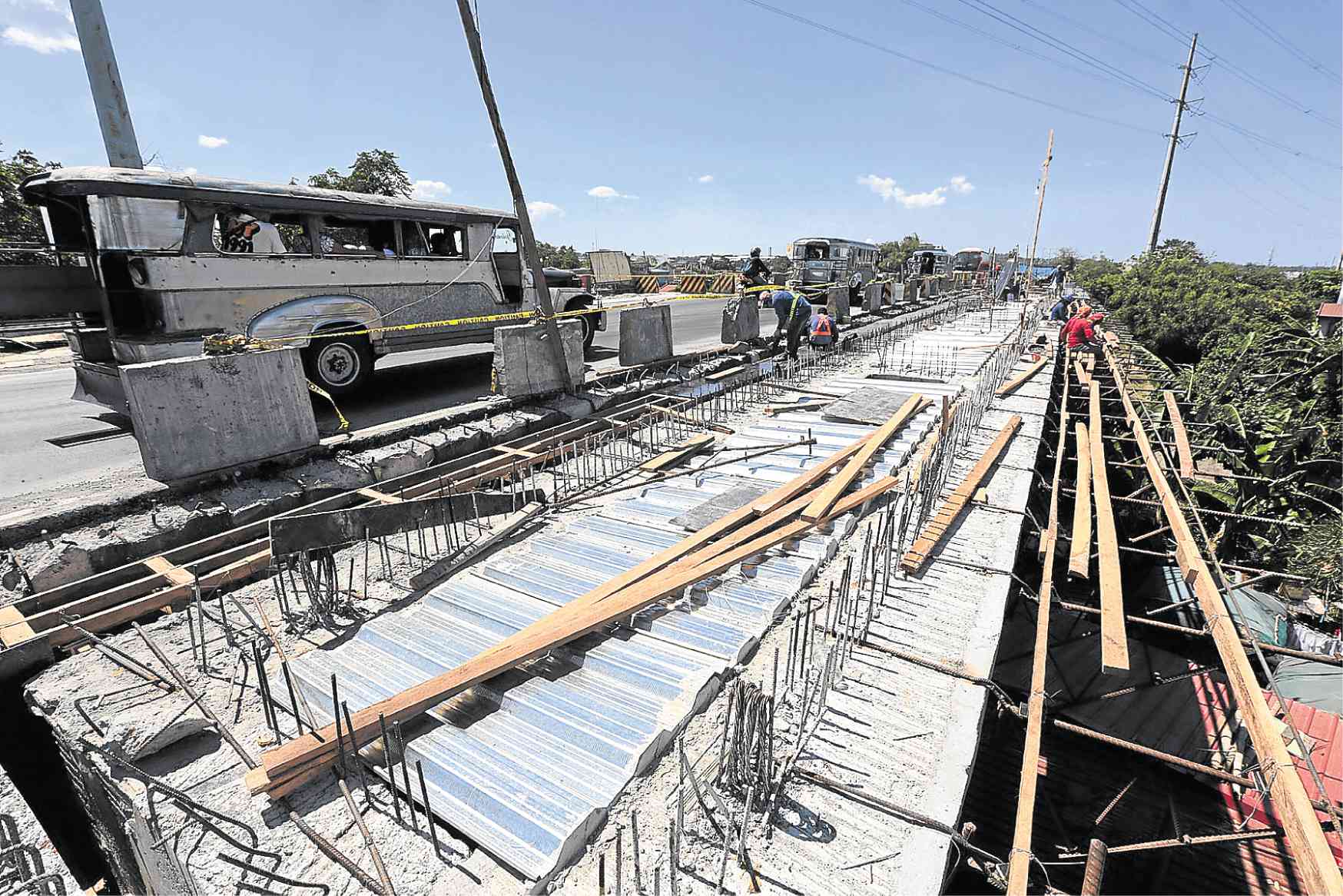 POORLY PLANNED The P71.7-million bridge-widening project in San Pedro, Laguna, was supposed to have been completed in November 2016. This is how it looks, as of last week. —GRIG C. MONTEGRANDE

The people of San Pedro City in Laguna were promised a wider bridge between the barangays of San Antonio and San Vicente by the end of 2016. But today, more than three years after the project contract took effect, construction is still ongoing.

Absence of proper planning by the project’s implementing office, the Department of Public Works and Highways (DPWH) in Region IV-A, and lack of coordination with other agencies are the clear reasons for the long delay, according to San Pedro City Administrator Filemon Sibulo.

The 200-meter bridge, known locally as San Isidro Bridge after the river that runs below it, connects the city boundaries of Muntinlupa and San Pedro to the latter’s town proper. It is part of a main route traveled daily by San Pedro residents.

The widening of the bridge from two to four lanes was planned to ease traffic. The work that began on Jan. 26, 2016, was scheduled for completion on Nov. 21 of the same year.

But on both bridge approaches stood tamarind, kamagong and ipil trees, among others. Clearing these required a permit from the Department of Environment and Natural Resources (DENR).

Below the bridge was a railroad owned by the Philippine National Railways (PNR), which claimed that the DPWH and the project contractor, VR Patron Builders and Developers Corp., were operating within its right of way. Thus, construction was deferred until the DPWH got a permit to enter and work in the area.

There were also some 50 informal-settler families living under the bridge, as well as a gas pipeline owned by First Philippine Industrial Corp. and a high-tension wire of the National Grid Corp. of the Philippines.

All these issues were addressed and the necessary permits secured only after work on the P71.7-million project began.

“Isn’t it that before starting a project, all permits have to be secured first and not when the project is already in progress?” Sibulo told the Inquirer, adding that the right of way issue with the state-owned PNR should have been settled first.

But the matter was already settled given that the bridge is part of a national road, which is entitled to a 20-meter right of way, the DPWH argued.

“When the PNR saw us working, they claimed that they have right of way in the area,” said project engineer Melquiades Sto. Domingo. “But we thought: Our project is a bridge and we are just working within the right of way parallel to it.”

The issue was later resolved, with the PNR maintaining a 30-meter authority in the area, he said.

“From the very start, we saw there were obstructions,” Sto. Domingo said. “The [delay in cutting] trees affected the informal settlers, and then there was the issue with the PNR. All were contributing factors in the project’s delay.”

The informal settlers, some of whom make a living by selling strings of sampaguita in Quiapo, Manila, had long stayed in the area whose right of way the DPWH initially claimed.

“Our presumption was we had already acquired the area’s right of way,” Sto. Domingo said. “Our anticipation was that the informal settlers under the bridge would immediately leave … But maybe our estimates failed. We did not think it would take them long to go.”

While mobilization for the project started in January 2016, the operations were not “on full blast” until June because of the informal settlers, the DPWH said.

But Sibulo said the informal settlers were not the problem because they were immediately relocated to designated areas in San Pedro. “The main issue was with the PNR, which put the construction on hold,” he said. “We told the DPWH:  ‘Why don’t you work on the approaches while construction under the bridge is on hold?’ But they said they couldn’t do that because they didn’t have a tree-cutting permit.”

Early in August 2016, the DPWH started excavation work under the bridge but was stopped due to a proposed PNR project that would require an additional railway track. The DPWH secured a permit to enter the PNR area, and construction resumed in the last week of September.

The DPWH sought a tree-cutting permit from the DENR in November, but it was approved only in September 2017.

“We actually focused on the bridge itself. It just so happened that we also needed to work on its approaches,” Sto. Domingo said.

“We have a lot of bridge-widening projects but there are no obstructions. In the case of the San Pedro Bridge, we had informal settlers and a railway below. We know we cannot use those as excuses, but they posed a challenge to us that we had to learn from,” he said.

Tricycle driver Fred Paragatos lamented the long delay: “It is a total inconvenience to students and those who go to work, especially when the bridge becomes one-way.”

Student Farah Zavala said using alternative routes was no solution: “That causes heavier traffic. Sometimes, no one works on the bridge and the building materials are just left there.”

The bridge is closed whenever the DPWH conducts major activities. But the times of these closures, and even that allotted by the city government for construction—10 p.m.-4 a.m.—are sometimes limited, Rotas said.

At this writing, 81.38 percent of the project has been accomplished, the DPWH reported.

But the people of San Pedro doubt it. “I’m not sure about that because they said they could finish the bridge by May 2017,” Sibulo said. “We hope it would be finished this year, but if you look at the bridge, you’ll see there’s still a lot of work to do.”