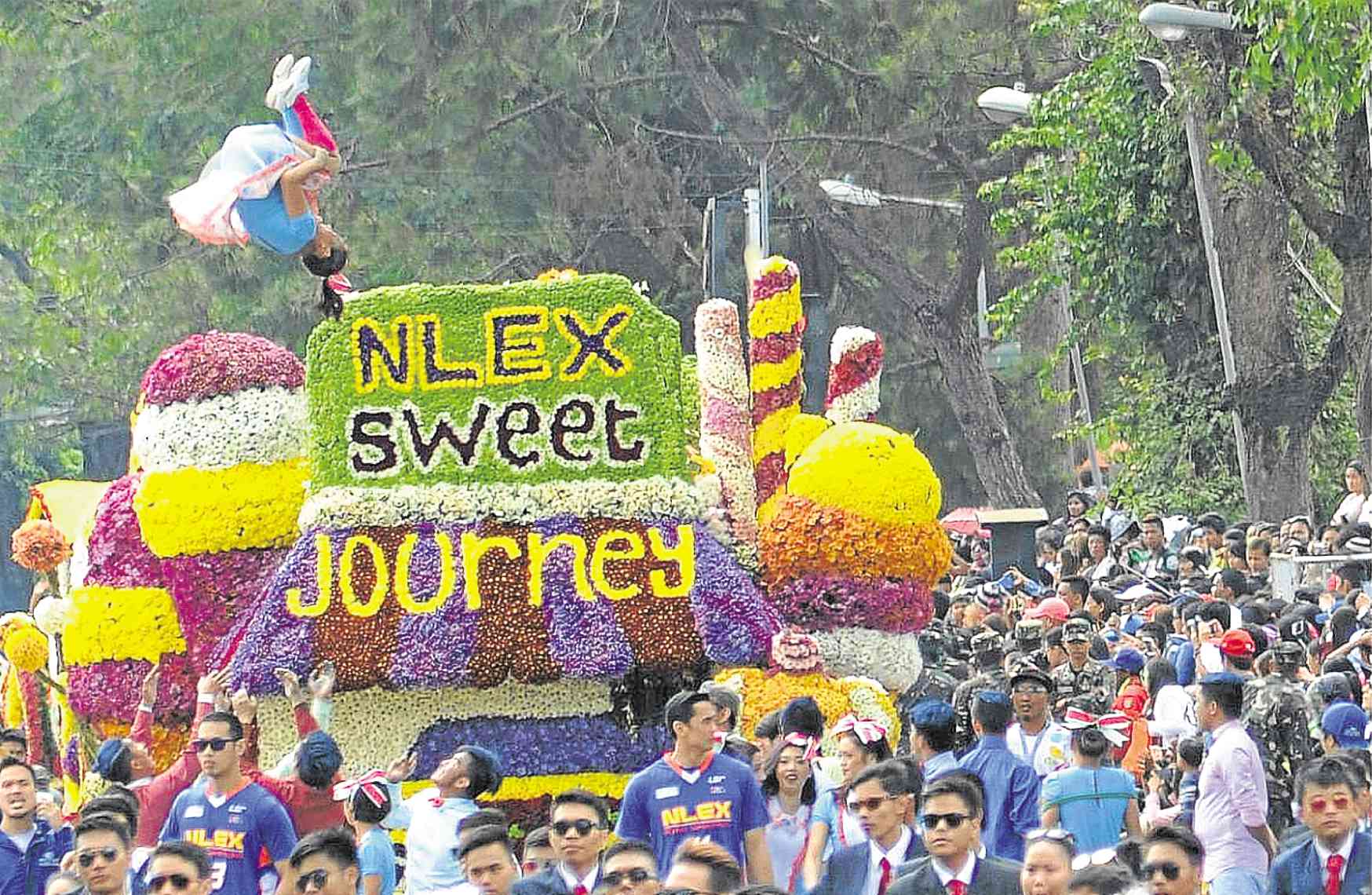 BAGUIO CITY — It takes three months, a million pesos and hundreds of hands to design and build an award-winning float that tourists can enjoy at the Panagbenga grand float parade today (March 3).

The work begins with a concept and a good artist chosen from a list of accredited floral designers.

Romy Chua, the artist behind Baguio Country Club’s floats that have won the festival’s Hall of Fame, says he and his clients started brainstorming for ideas three months ago.

A horticulturist and florist, Chua is putting up six floats for today’s parade. One of them will join the parade for the first time to promote a product.

John Kimo, who has also designed several floats that have bagged major awards, says his clients give him freedom to conceptualize their design. He used to work with Chua until 2002, and is now based in Perth, Australia, where he works as a landscape artist.

Kimo has been corresponding with his clients whose budget ranges from P350,000 to P1 million. When the concept is finalized after one or two months, the artist assembles his team of workers. 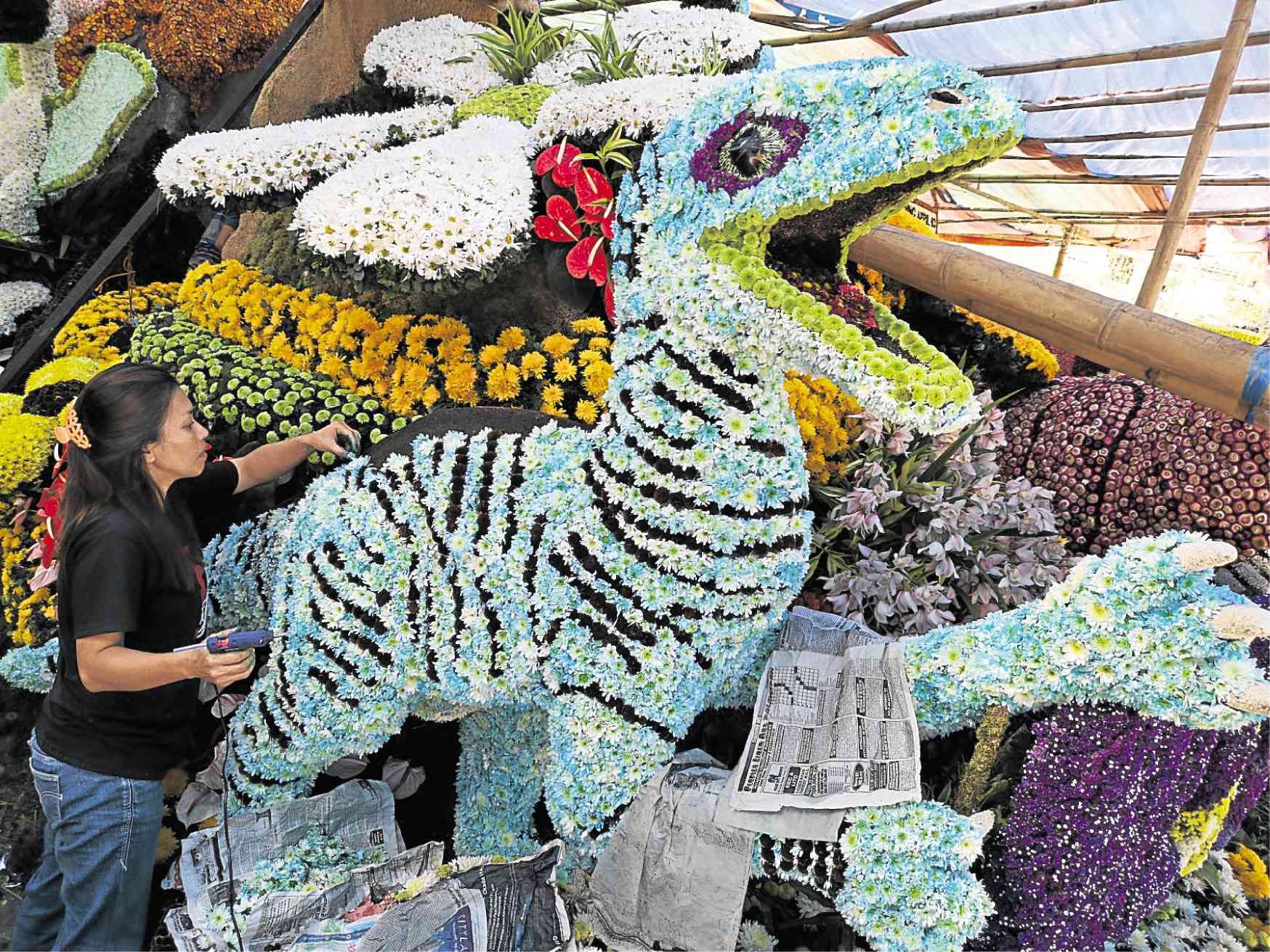 WORKS OF ART Craftsmen using dried and fresh flowers adorn a float featuring dinosaurs days before the Panagbenga grand float parade. It takes weeks to produce the colorful float (below) which rolled down Baguio City’s main streets in 2016. —PHOTOS BY EV ESPIRITU 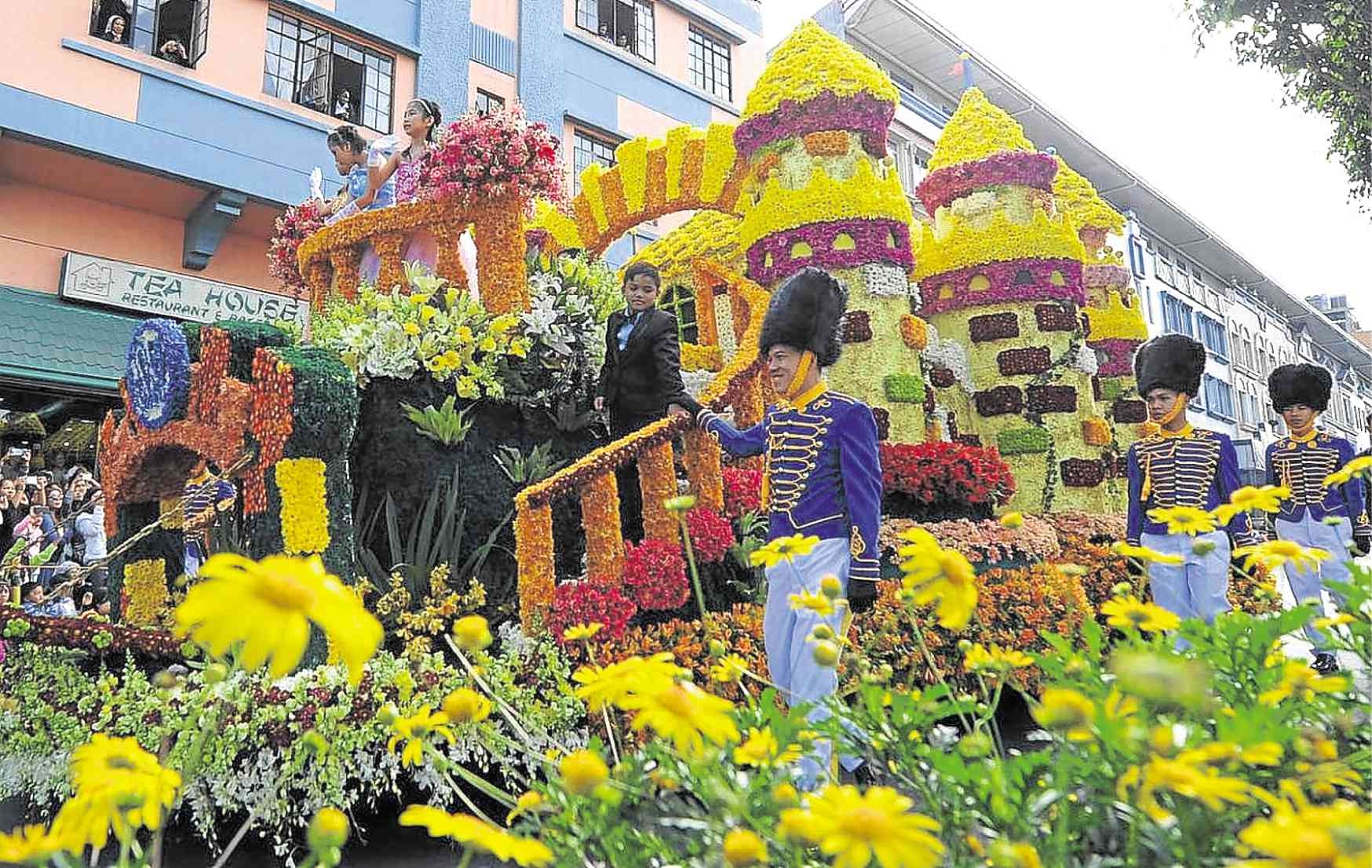 Kimo gathers friends who are farmers, gardeners and florists. For this year’s Panagbenga, they are building five floats.

Chua hires 100 workers to design and build five to six floats. He gathers workers from his previous projects, among them his students in landscaping and floristry, as well as out-of-school youth in his barangay.

“Some of them have regular jobs so they take a leave from their work to focus on this project. I also hire those who have zero knowledge in float design and train them,” Chua says.

A month before the parade, a car mechanic conditions the truck that will be used for the float. The stability of each float relies on well-conditioned trucks, Kimo says.

By the last week of January, the workers would have already bought materials, such as chicken wire, steel bars, floral foams, nails, lightbulbs, wood, glue, moss and dried flowers, which are stored at a rented work area. 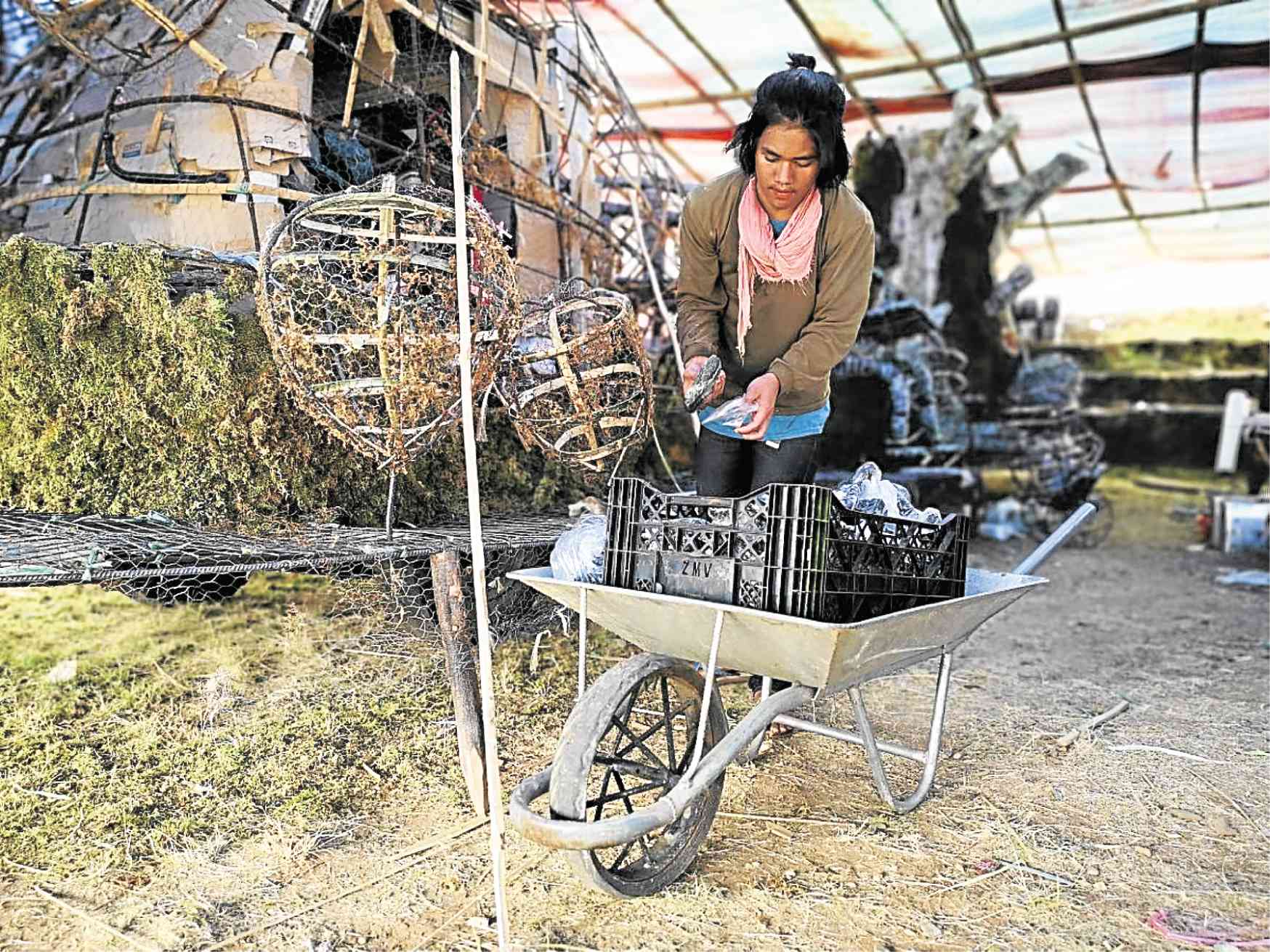 RUSH A worker rushes to finish a component of a float for today’s parade.

They also recycle all sorts of materials they can find at home and in junk shops. Under a big tent where Chua and his team work, men and women use discarded plastic bottles, motorcycle wheels, sawdust, banana peels, tree barks and other materials from previous festivals.

In the first week of February, the structural skeleton of the float takes shape. For 10 to 15 days, depending on the size and design of the float, five to six welders and carpenters fabricate the frames.

“If the design is not complicated, we can finish one float in 20 days,” Chua says.

The float will last longer if it has efficient hydraulic systems to provide the special effects. It takes 10 days to build the hydraulics, which can cost P1.5 million, Chua and Kimo say.

Once the frame is completed, fiberglass and flower arrangements are installed. Florists will meticulously glue moss, dried sunflowers and the iconic everlasting flowers that last longer than other flower varieties.

Chua and Kimo say the critical stage of their work takes place five days before the parade, when they decorate with thousands of fresh cut flowers.

For more than 10 years, the designers have been using different varieties of chrysanthemum, anthurium, gladiolus, stargazer, alstroemeria, gerbera and heliconia, as well as roses, asters and orchids.

Kimo orders the flowers from his friends who have their own gardens and farms, while Chua buys them at the Baguio market.

A week before the parade, an electrician installs and checks lightbulbs that brighten up the floats.

The float is 80 percent finished three days later and will be bursting with vibrant colors and craftsmanship the day before the event.