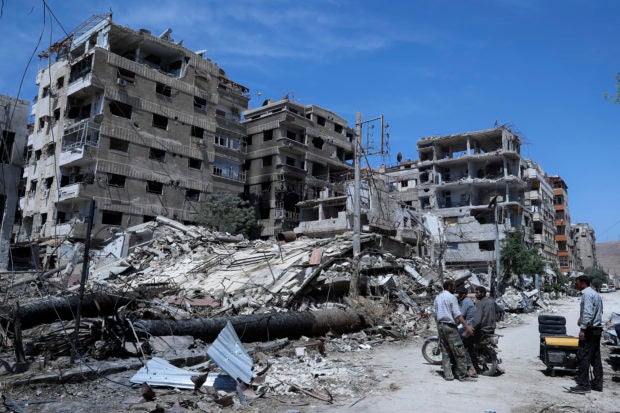 In this April 16, 2018 file photo, people stand in front of damaged buildings, in the town of Douma, the site of a suspected chemical weapons attack, near Damascus, Syria. The global chemical weapons watchdog says an investigation has found “reasonable grounds” that chlorine was used as a weapon in an attack on the Syrian town of Douma last year. The Organization for the Prohibition of Chemical Weapons issued a final report Friday, March 1, 2019 of its Fact Finding Mission probe into the attack on April 2018. The United States, Britain and France blamed Syrian government forces for the attack and launched punitive airstrikes. (AP Photo/Hassan Ammar)

THE HAGUE, Netherlands — The global chemical weapons watchdog said Friday it found “reasonable grounds” that chlorine was used as a weapon in a deadly attack on the Syrian town of Douma last year.

The determination was contained in a detailed report by the Organization for the Prohibition of Chemical Weapons’ (OPCW)  fact finding mission that investigated the April 7, 2018 attack. Medical workers said at the time that the attack killed more than 40 people.

The mission’s mandate does not include laying blame.

In a statement, the OPCW said the mission visited Douma, analyzed samples taken from the scene and from people affected, interviewed witnesses and studied toxicological and ballistics analyses.

The investigators were delayed by several days from reaching the scene by security concerns, leading to fears that evidence could degrade or be cleaned up.

However, the data they eventually amassed and studied provided “reasonable grounds that the use of a toxic chemical as a weapon” took place, the OPCW said.

Survivors reached by The Associated Press in the aftermath of the attack said they were overwhelmed by the smell of chlorine on the night of April 7. Activists said many of the dead were found with foam around their mouths, an indicator for suffocation. Medical workers said they treated symptoms including difficulty breathing and fainting.

Douma was the final target of the government’s sweeping campaign to seize back control of the eastern Ghouta suburbs of Damascus from rebels after seven years of revolt. Militants gave up the town days after the alleged attack.

The OPCW said the report has been sent to the United Nations Security Council.

Russia, a staunch ally of Syrian President Bashar Assad, rejected claims that Syria was responsible for the attack and even brought what it called witnesses to The Hague to describe their experiences.

In a tweet Friday, the Russian embassy in The Hague said the OPCW reached its finding, “in spite of all the evidence presented by Russia, Syria, and even British journalists that the Douma incident is no more than ‘White helmets’ staged provocation.”

A joint investigative mechanism between the United Nations and OPCW, set up in 2015, was responsible for apportioning blame, but it was disbanded after Russia vetoed an extension of its mandate at the UN Security Council. Moscow claimed the team was not professional or objective in its investigations.

The team accused Syria of using chlorine gas in at least two attacks in 2014 and 2015 and the nerve agent sarin in an aerial attack on Khan Sheikhoun in April 2017 that killed about 100 people and affected about 200 others. The latter attack led to a U.S. airstrike on a Syrian airfield.