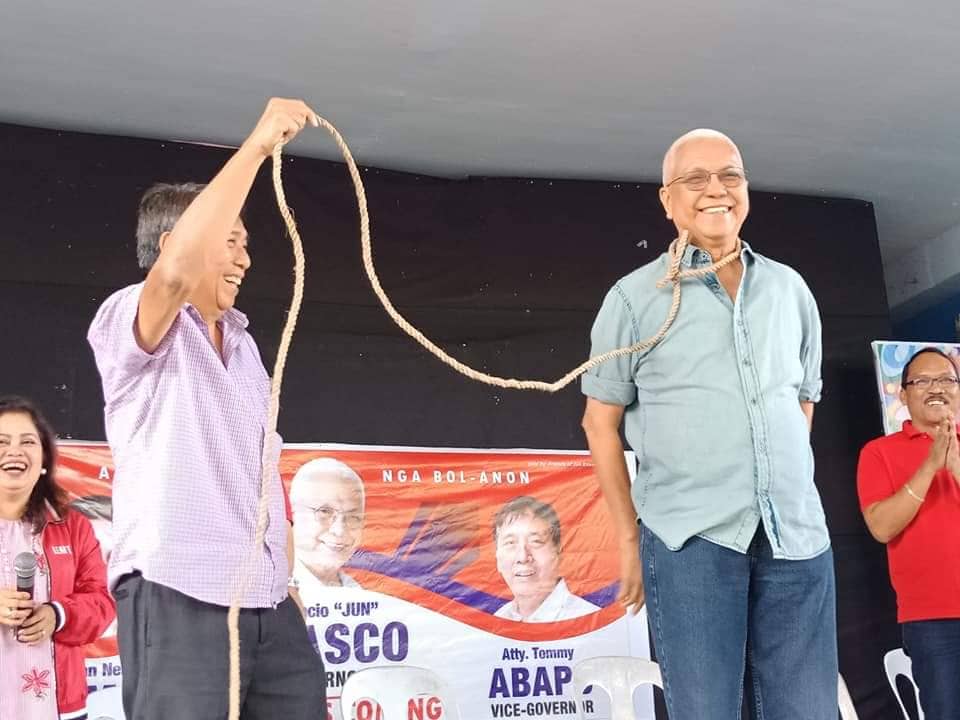 EXECUTION Former Cabinet Secretary Leoncio Evasco Jr. smiles as a noose is placed around his neck in an attempt to ridicule a threat made against him by a political rival. —ALLEN DOYDORA/CONTRIBUTOR

MARIBOJOC, Bohol— The noose around Leoncio Evasco Jr.’s neck was real but the spectacle on stage was just one of those political dramas that characterize many election campaigns.

Evasco, former Cabinet secretary who is now running for Bohol governor, was unflinching when an ally, Board Member Tomas Abapo, placed a rope with a noose around his neck.

It was a play on a challenge made by Ae Damalerio, Bohol provincial administrator who is running for vice governor with Rep. Arthur Yap, Evasco’s main rival for the gubernatorial seat.

Damalerio had challenged Evasco to show proof of his allegation that Damalerio and Gov. Edgar Chatto, who supports the candidacy of Yap, were involved in drugs or be hanged if he failed to do so.

Evasco invited Damalerio on stage to hang him but the former Cabinet official was left hanging with no Damalerio around.

The controversy started when Evasco accused Damalerio and Chatto of protecting the drug trade in Bohol.

Evasco made the accusation in Hong Kong, while attending a gathering of the Boholano community there.

He alleged that some provincial officials were on President Duterte’s drug watch list.

Damalerio denied the allegation, calling it “political propaganda with hot air that has no proof nor basis.”

He dared Evasco to present evidence against him on Feb. 28.

Damalerio said he would hang Evasco at the flagpole in front of the Maribojoc town hall if Evasco failed to present proof.

On the same day, Evasco showed up at the Maribojoc gymnasium to wait for Damalerio.

With Evasco, former mayor of Maribojoc, were at least 2,000 supporters and members of the group Alyansang Bol-anon Alang sa Kausaban.

When Damalerio didn’t arrive, Abapo was ready for the hanging ceremony.

Evasco also played a short video where he thanked supporters for allowing him to say goodbye because he was ready to die.

“I have completed my obligation as father to my children,” Evasco said in the video.

“I don’t have obligation to God because I had given my life to the people,” he added in his “farewell” video.

“I am ready to die in the hands of Ae Damalerio,” Evasco said, asking Boholanos to “pray for his soul.”

The execution, however, was not to be. Evasco also did not present evidence against Damalerio.

Reached for comment, Damalerio said Evasco’s drama was proof that the former Cabinet secretary had no evidence against him and the governor.

Police and the Philippine Drug Enforcement Agency, Damalerio added, had already cleared him of accusations he was involved in drugs.

Damalerio said since Evasco failed to show proof of his accusations, “it only means he capitalized on it for political propaganda.”

“Let’s not focus on the hanging being clearly only creating a statement about demanding proof,” he said.