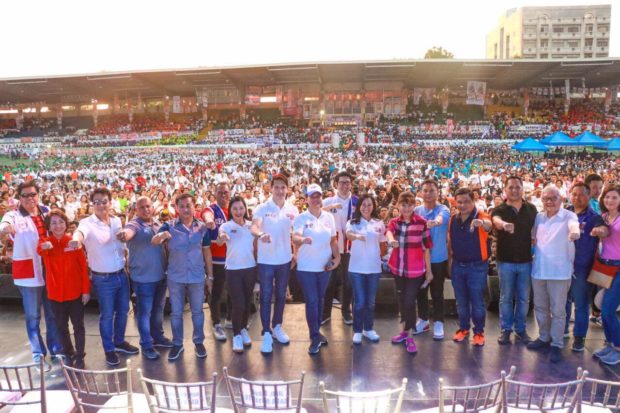 “We are happy to welcome once again Mayor Sara and the candidates of Hugpong in the biggest city in Metro Manila. We’re here today to show the voters that Hugpong and our candidates in Quezon City are united in our goals of true service and good governance,” Belmonte, who is running for mayor in the upcoming elections, said in an interview.

Then in November, Quezon City’s local party personally pledged its support to Mayor Duterte and the candidates endorsed by HNP.

“What President Duterte and Mayor Sara have fought for is change for the good of our country, and I, as well as my fellow candidates from the city and the national candidates we support, aim to deliver that,” Belmonte said to the audience in the jampacked stadium.

Meanwhile, the delegation from the SBP was led by Belmonte, Councilor Gian Sotto, who is running for vice mayor in the 2019 elections, Representative and former House Speaker Feliciano Belmonte, and Cong. Winnie Castelo.