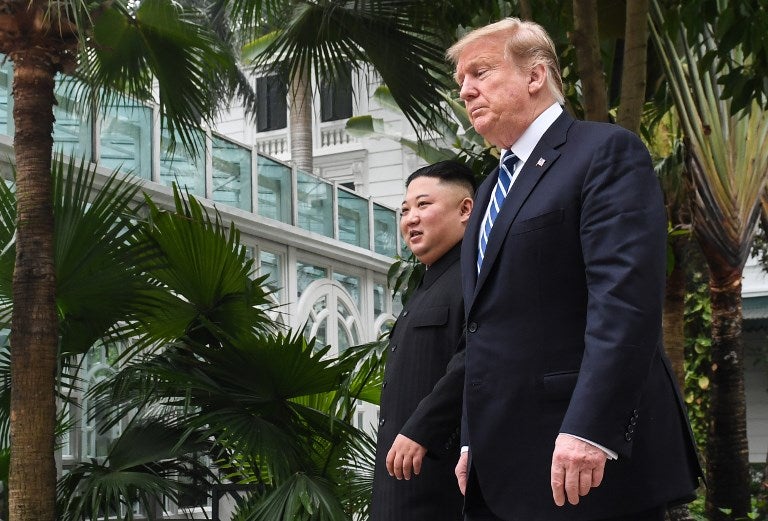 US President Donald Trump (R) walks with North Korea’s leader Kim Jong Un during a break in talks at the second US-North Korea summit at the Sofitel Legend Metropole hotel in Hanoi on February 28, 2019. (Photo by Saul LOEB / AFP)

HANOI — The US-North Korea nuclear summit in Hanoi ended abruptly without a deal on Thursday, with President Donald Trump saying he had decided to “walk” in the face of Kim Jong-un’s unacceptable demands to drop sanctions.

The much-anticipated second meeting between the two leaders was supposed to build on their historic first summit in Singapore last year, but they failed to sign a joint statement as initially scheduled and the talks ended in deadlock.

“Sometimes you have to walk and this was just one of those times,” an unusually downbeat Trump told reporters.

“Basically they wanted the sanctions lifted in their entirety and we couldn’t do that,” he said.

But Trump insisted he was “optimistic that the progress we made” before and during the summit left them “in position to have a really good outcome” in the future.

“I’d much rather do it right than do it fast,” he added.

Trump said further sanctions on North Korea were not necessary despite the failure of his summit with Kim.

He said he did not “want to talk about increasing sanctions.”

“They are strong, there are a lot of great people in North Korea that have to live also,” he said.

Trump said Kim had vowed not to resume nuclear or ballistic missile testing—something he previously identified as a yardstick for success—but said a third summit with the Pyongyang strongman was not on the cards so far, despite reiterating their “close relationship.”

“We just like each other … there’s a warmth that we have and I hope that stays, I think it will,” Trump said.

Both leaders’ motorcades roared away from the downtown Hanoi summit site within minutes of each other after both a lunch and the signing ceremony were scuttled.

A North Korean delegation led by Vice Minister Ri Kil-song left for China after the stunning collapse of the talks.

China’s foreign ministry said it hoped dialogue and communication between the United States and North Korea could continue.

Trump said he and Kim had spoken a lot about China during their summit, but the North Korean was not taking orders from anyone.

China had been a “big help” with North Korea, which was calling its own shots, Trump told a news conference after the summit.

The outcome in Hanoi fell far short of the premeeting expectations and hopes, after critics said their initial historic meeting in Singapore was more style over substance.

“This is a major failure,” tweeted Joe Cirincione, president of the Ploughshares Fund peace foundation.

It showed the limit of summitry, he added, with “not enough time or staff” to work out a deal.

In the original White House program, a “Joint Agreement Signing Ceremony” had been scheduled in Hanoi, as well as a working lunch for the two leaders.

In the event, both men left the summit venue without signing anything, and Trump moved up his news conference by two hours.

Ankit Panda, from the Federation of American Scientists, warned on Twitter that the White House’s expectation of further talks “does not have to be a perception shared in North Korea.”

“Kim may have left irate, for all we know. He may have no intention of continuing this,” Panda added.

Trump flew around the world for the meeting and Kim undertook a mammoth two-and-a-half-day trek through China in his olive green train, traveling 4,000 kilometers.

At first, the smiles and bonhomie from Singapore ran on into their second date in Hanoi as Trump touted the “special relationship” between the two, although concrete statements were vague.

The US president frequently dangled the prospect of a brighter economic future for a nuclear-free North Korea, at one point saying there was “AWESOME” potential.

From the outset, he had appeared to play down expectations of an immediate breakthrough in nuclear talks, saying he was in “no rush” to clinch a rapid deal and was content if a pause in missile testing continued.

No deal better than bad one

But Harry Kazianis, director of Korean Studies at the Center for the National Interest, said no agreement was better than a bad one.

There would be “nothing worse than signing a deal just to get something,” he told Agence France-Presse.

“The challenge is North Korea’s nuclear weapons are already a reality,” he added. “Getting a deal that does little to nothing to remove that threat would be far worse than a flawed deal.”

In Singapore, the two signed a vague document in which Kim pledged to “work toward complete denuclearization of the Korean Peninsula.”

Progress subsequently stalled, with the two sides disagreeing on what that means, as the North sought relief from sanctions and Washington pressed for concrete steps toward it giving up its weapons.

As in Singapore, the two men put on a show of bonhomie in Vietnam, appearing to share jokes in front of reporters.

Looking relaxed but appearing to say little, they indulged in a poolside stroll on Thursday around the gardens of the luxury Metropole Hotel, a colonial-era building that has played host to stars ranging from Charlie Chaplin to Brad Pitt.

It was a far cry from the height of missile-testing tensions in 2017 when Trump slammed Kim as “rocket man” and the younger man branded the American president a “mentally deranged US dotard.”

In apparently unprecedented scenes, Kim answered unscripted questions from foreign reporters, saying he would welcome the establishment of a US liaison office in Pyongyang, which would be a step on the way to diplomatic normalization.

Before the summit, there was talk that there could be a political declaration ending the 1950-53 Korean War, which finished technically with an armistice rather than a peace treaty.

There were also hopes Kim could pledge to destroy North Korea’s decades-old Yongbyon nuclear complex, which has long been at the heart of Pyongyang’s atomic development but remains shrouded in secrecy.

North Korea has promised to mothball it twice before. —REPORTS FROM AFP, AP