Ratting on former boss, Cohen says Trump acted ‘much like a mobster’ 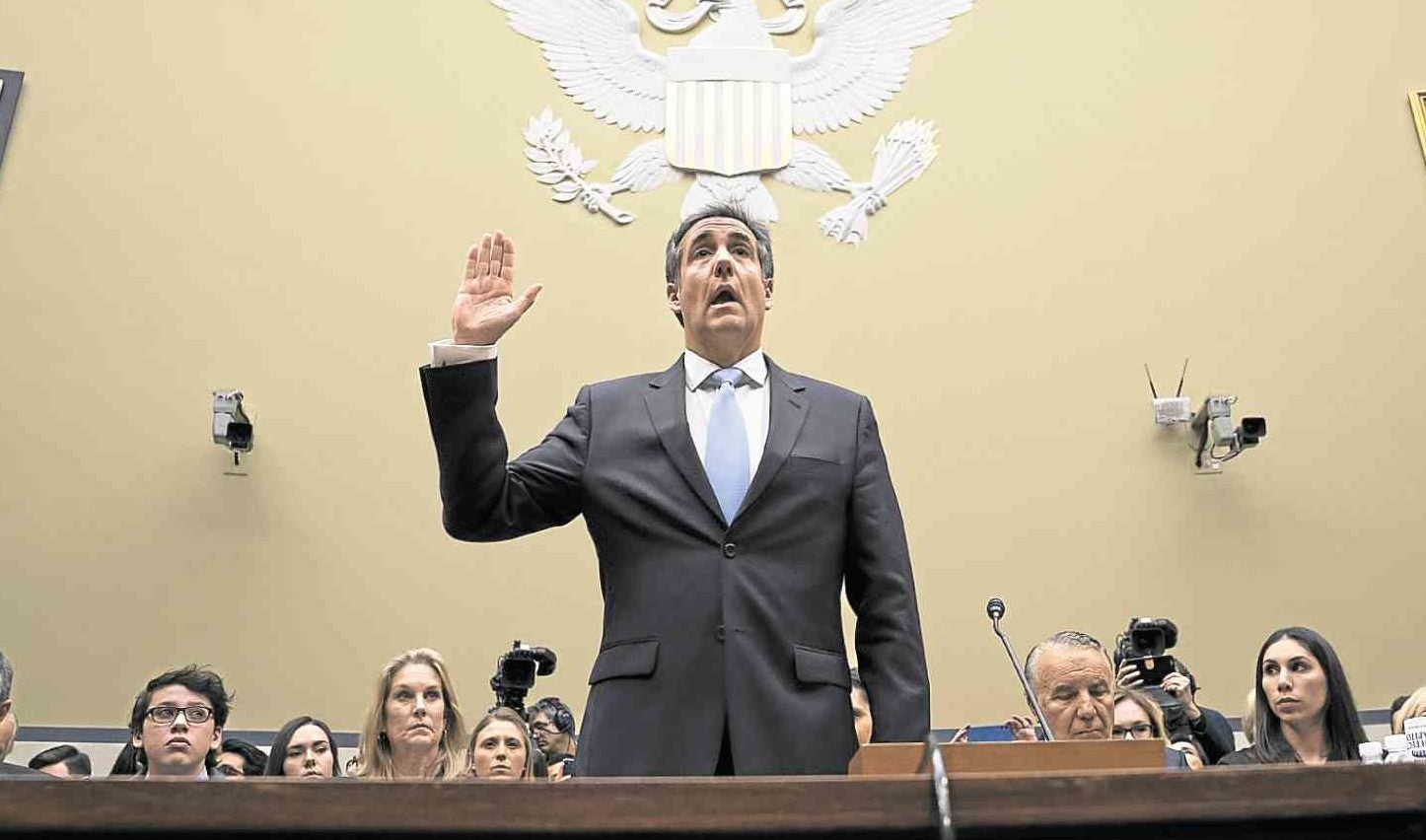 CONSIGLIERE In his scathing testimony, Donald Trump’s former lawyer Michael Cohen described himself as a consigliere, telling lawmakers he did Trump’s bidding for years, intimidating maybe 500 people and lying to scores, including the first lady. —AP

WASHINGTON—He carried out the boss’ wishes. He understood “the code.” He was blindly loyal—but now he’s considered a rat.

Donald Trump’s former lawyer Michael Cohen spoke at length on Wednesday about his life in the president’s inner circle, but the most vivid descriptor came in just six words. Trump ran his operation “much like a mobster would do,” Cohen said.

In Cohen’s scathing testimony at a House committee hearing, he repeatedly described Trump, the onetime head of a family business, like a mob boss minus the body count: quick to bully and expecting others to do his dirty work.

Cohen described himself as a consigliere, telling lawmakers he did Trump’s bidding for years, intimidating maybe 500 people and lying to scores, including the first lady.

But Trump never directly told him to do it, he said.

He said he had lied by claiming that Trump was “not knowledgeable” about the transaction even though the president had directly arranged for his reimbursement.

And he said he was left with the unmistakable impression that Trump wanted him to lie to Congress about a Moscow real estate project, though the president never directly told him so.

Cohen is facing a three-year sentence for lying to Congress in 2017 and other charges.

He came back to Capitol Hill this week, worrying for his family’s safety, but claiming he would no longer lie for his former boss and was ready to spill.

“My loyalty to Mr. Trump has cost me everything: my family’s happiness, friendships, my law license, my company, my livelihood, my honor, my reputation and, soon, my freedom,” Cohen said. I will not sit back, say nothing and allow him to do the same to the country.”

Trump has denied the allegations against him and called Cohen a liar. Even as he’s done so, he’s used mobspeak.

“Remember, Michael Cohen only became a ‘Rat’ after the FBI did something which was absolutely unthinkable & unheard of until the Witch Hunt was illegally started,” Trump tweeted in December. “They BROKE INTO AN ATTORNEY’S OFFICE,” he wrote, referring to the raid on Cohen’s office that touched off the now-disbarred lawyer’s eventual guilty plea.

In his testimony, Cohen called Trump a “con man” who knew in advance about the release of stolen e-mails aimed at hurting his Democratic rival Hillary Clinton in the 2016 election campaign.

But he also said he had no “direct evidence” that Trump or his aides colluded with Russia to get him elected, the primary question of special counsel Robert Mueller’s investigation.

He said Cohen had lied “a lot” in his congressional testimony, but told the truth when he said there had been no collusion with Russia.

During the hearing, Democratic Rep. Gerry Connolly even likened Cohen to Joe Valachi, an American gangster known as the “first rat” whose 1960s testimony before Congress led to the eventual dismantling of organized crime.

“This Congress historically has relied on all kinds of shady figures who turned,” Connolly said.

In his book “A Higher Loyalty: Truth, Lies and Leadership,” former FBI Director James Comey said he got the sinking feeling that Trump’s operation functioned like the mob.

Former acting FBI Director Andrew McCabe spun a similar story, and a former agent and former federal prosecutor tweeted on Wednesday that Trump’s tactics as detailed by Cohen sure felt a lot like the mafia.

There’s even a “Godfather: Part II” reference in the indictment by the special prosecutor investigating Trump’s possible ties to Russia.

Trump confidant Roger Stone told an associate to pull a “Frank Pentangeli” before a House committee, the indictment says.

In the film, Pentangeli, an associate of mob boss Vito Corleone, lies to protect the family during congressional testimony. —REPORTS FROM AP