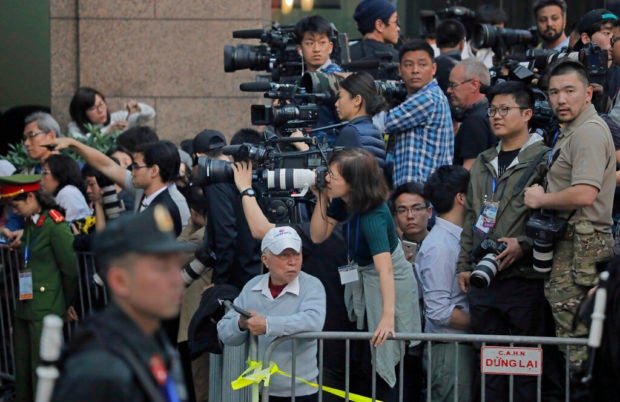 In this Wednesday, Feb. 27, 2019 photo, journalists gather outside Metropole hotel where US President Donald Trump and North Korean leader Kim Jong Un are to have their meeting in Hanoi, Vietnam. AP

HANOI, Vietnam — For a one-party communist state without a free press, there were bound to be some kinks when Vietnam agreed to welcome more than 2,600 journalists from around the world to its capital for one of the biggest news stories of the year.

But Vietnamese officials also saw an upside to hosting media from around the world: This was a unique chance to polish their country’s image and perhaps boost tourism and investment.

They were also keen to show themselves as members in good standing of the global community by hosting the second summit between President Donald Trump and North Korean leader Kim Jong Un.

Hanoi was chosen for the summit location roughly two weeks ago, and Foreign Ministry spokeswoman Le Thi Thu Hang said whatever bumps might occur would be the result of having very little time to prepare for the largest number of foreign media to ever descend on Vietnam’s capital at one time.

Reporters generally agree security during the summit is tight — maybe a bit too tight for their liking.

When Kim transferred at the China-Vietnam border from his personal train to an armored limousine for the two-and-a-half hour drive to Hanoi, Highway One was closed to traffic and thousands of police and military personnel were deployed along the route.

Whenever he or Trump ventures out from his Hanoi hotel, barricades ensure the streets along his route are deserted when his motorcade passes through.

While Kim’s travel plans and itineraries are routinely kept secret, getting information relating to Kim’s activities has been harder in Vietnam than it was in Singapore during the first summit last June, said Peter Wang, who works for Taiwan’s Eastern Broadcasting Company.

“You can even follow Kim Jong Un, his personal activities, while he went out middle of the night in Singapore. All reporters when they knew the information, they could rush to the location trying to get a shot to film what Kim Jong Un did,” he said. “But here it’s very hard. They blocked the road a couple of blocks away and police are very strict.”

Some reporters received a rude awakening about their host’s priorities just before the leaders arrived in town. The White House press corps was forced to leave its established work space at the Melia Hotel after last-minute word that Kim would be staying there. The White House-based journalists now share space at the International Media Center.

Their ouster reportedly came at the request of the North Korean delegation. Some members of the elite press group were so irate at being turfed out that they posted their outrage on Twitter.

The White House also restricted press access during the summit, prohibiting four print reporters, including one from The Associated Press, from covering the beginning of Trump’s dinner with Kim in Hanoi on Wednesday. That came after two of those reporters asked questions of the president during earlier events at the summit.

Hanoi Mayor Nguyen Duc Chung told city residents to be on their best behavior, noting the presence of foreign journalists.

In a message on the city’s website, he urged them to “maintain and sustain Hanoians’ code of behavior, heighten the image of civilized, elegant, friendly and hospitable Vietnamese people and Hanoi residents in the eyes of international press and friends.”

He also pleaded for businesspeople to “refrain from hiking prices of goods and services during the summit.”

“This is the best opportunity to publicize the culture, development and image of Vietnam and capital Hanoi to the international community, maintaining peace and friendship,” his statement said.

All his exhortations, though, couldn’t tame Hanoi’s traffic.

Robert Costantini, the White House correspondent for Westwood One News, a US radio news network, found maneuvering on the streets a challenge.

“The traffic here is just kind of really amazing,” he said, noting it was like nothing he had experienced before. “All the people on motorbikes, and the bus will turn in front of them, and then they stop and try to squeeze through. It’s just amazing visually for me.”

Getting around in Hanoi is totally different than in the “very rigid and disciplined society” of Singapore at the first Trump-Kim summit, Costantini said.

However, in pondering the main attraction rather than the sideshows, a Finnish reporter who also covered the Singapore meeting saw a reason for the differences in the two summits.

“This is a different summit in all aspects. There was really excitement simply to see Kim Jong Un and his caravan coming through Singapore,” said Mika Hentunen, the U.S. correspondent of Finnish Broadcasting Company YLE. “Now there’s not that excitement anymore.

Now it’s like they want to have results. That’s why it’s more businesslike.” /ee