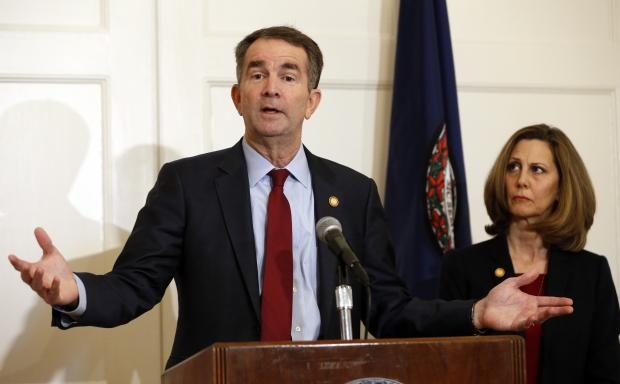 Virginia Gov. Ralph Northam, left, accompanied by his wife, Pam, speaks during a news conference in the Governor’s Mansion in Richmond, Virginia, on Saturday, Feb. 2, 2019. Resisting widespread calls for his resignation, Northam on Saturday vowed to remain in office after disavowing a racist photograph that appeared under his name in his 1984 medical school yearbook. Image: AP/Steve Helber

Pam Northam, the wife of Virginia governor Ralph Northam, has come under fire after she handed raw cotton to young African-Americans during a recent tour at the state’s Executive Mansion.

The complaint was made by a Virginia state employee after her 8th grade daughter, who served as a Senate Page, told her of the incident. Northam, as per the Washington Post on Feb. 27, apparently gave cotton to other African-American children in the tour. Later, she asked them, “Can you imagine being an enslaved person and having to pick this all day?”

The 8th grader, unidentified, wrote a letter to Northam as per WAVY via WRIC on Feb 27. The letter, dated Feb. 25, saw the 8th grader narrate the incident.

“There are only three black pages in the page class of 2019. When you went to hand out the cotton you handed it straight to another African American page,” she said.

The 8th grader did not take the cotton when Northam handed her some and was instead taken by another black page.

“It made her very uncomfortable… But you followed this up by asking, ‘can you imagine being an enslaved person, and having to pick this all day?’ which didn’t help the damage you had done.”

The 8th grader also called out Northam for the inappropriate way she carried herself: “From the time we walked into the mansion to the time in the cottage house, I did not receive a welcoming vibe.”

Meanwhile, Northam has responded to the criticism and regretted the incident, as per WAVY on Feb. 27. She said she has provided the same educational tour for visitors for the past couple months.

“[I have] used a variety of artifacts and agricultural crops with the intention of illustrating a painful period of Virginia history,” Northam was quoted as saying. I regret that I have upset anyone.”

She also added that she is committed in her initiative in chronicling the history of Virginia and vowed to engage with historians and experts in the future.

Her husband, Gov. Ralph Northam, was also involved in an issue this February, which is Black History Month. A 1984 yearbook photo surfaced and showed two men, a man in blackface and the other in a Ku Klux Klan robe, posing for a picture. He appeared to be one of the men.

The governor first apologized for the photograph, but backtracked a day later, saying he was not in the photograph after all. Cody Cepeda/JB

Was racist photo in Virginia governor’s college yearbook a mix-up?