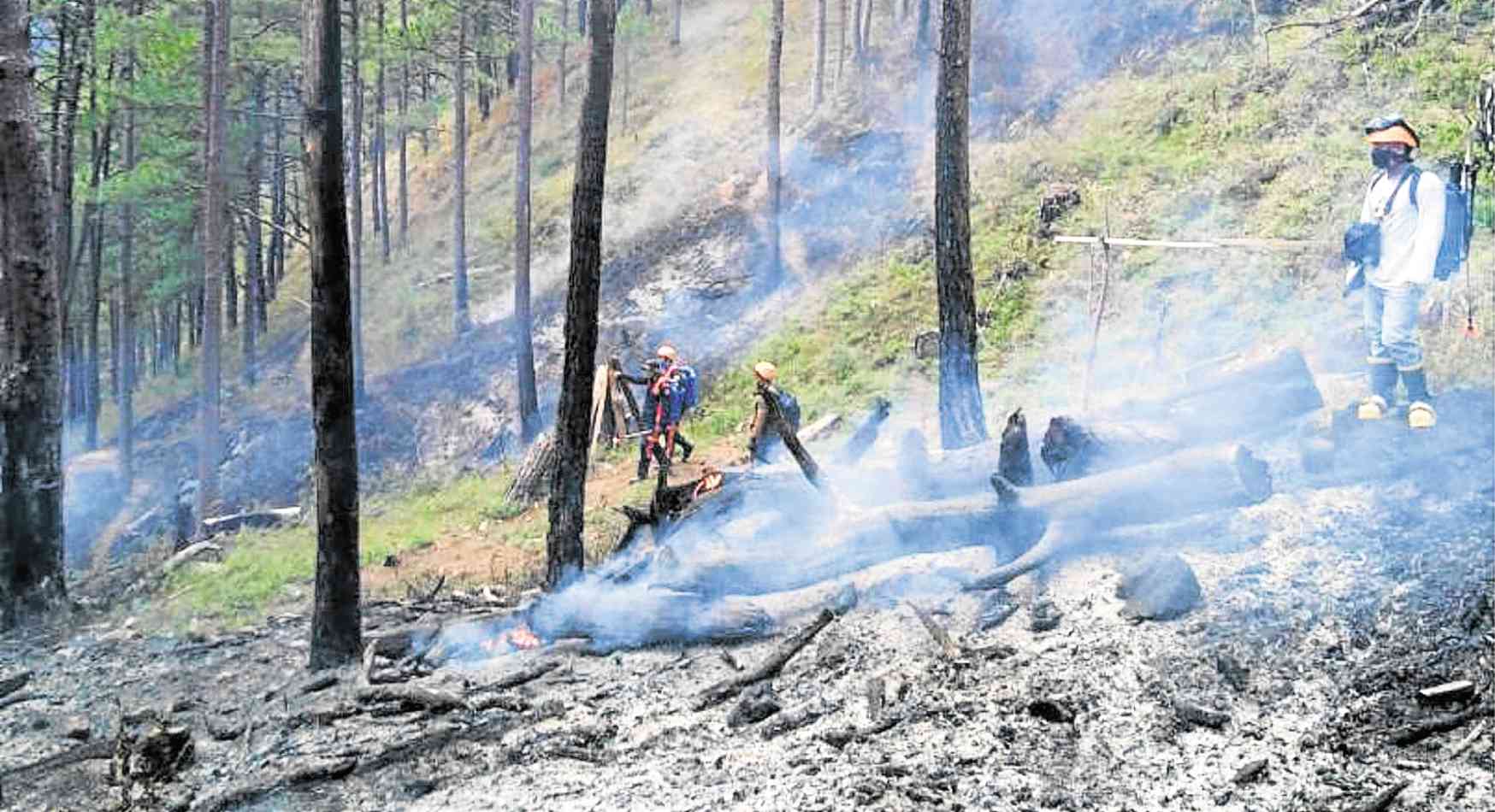 BURNT FOREST Firefighters put out a forest fire that started in Duacan village in Kabayan, Benguet, and spread to neighboring areas, including parts of Akiki trail, one of the routes to Mt. Pulag. —PHOTO COURTESY OF BFP CORDILLERA

BAGUIO CITY — Authorities in the Cordillera closed several mountain trekking trails, deployed firefighters and formed a task force to avert the spread of fire that continued to destroy upland forests.

On Wednesday, the Bureau of Fire Protection (BFP) said it had recorded 90 forest and grass fires in Benguet and Mountain Province since January, with one incident killing five foresters in Benguet last week.

The forest fires had razed more than 180 hectares in the two provinces, prompting local officials to form an interagency task force to address the problem.

The Spanish trail leading to Bauko 7 Peaks and the Usan trail going to Mt. Bato in Bauko town, Mountain Province, have been off limits to trekkers since Feb. 20 after a fire hit portions of Mt. Am-o spanning Bauko and Tadian towns.

Arsenia Addon, tourism officer of Bauko, said the fire at Mt. Am-o, a watershed, started on Feb. 17 and raged for six days. A farmer from Tadian was killed in that fire.

“The trails will remain closed until the burned areas are rehabilitated,” Addon said.

On Feb. 20, four foresters of Philex Mining Corp. and an elderly resident were killed in a fire that hit a forest area covering 60 ha that straddles Itogon and Tuba towns in Benguet.

The charred bodies of the four foresters were found 50 meters below Philex’s tree nursery, which was also destroyed by the blaze.

The body of the fifth casualty, a retired company employee, was located 40 meters from where the foresters were found.

TRAIL FIRE A patch of pine forest in Kabayan, Benguet, is destroyed by fire, prompting local officials to close some mountain trails to trekkers. —PHOTO COURTESY OF BFP CORDILLERA

In the tourist town of Sagada in Mountain Province, authorities recorded at least seven forest fires this month. The most recent fire gutted 6 ha of forest at Barangay Aguid on Feb. 21.

Sagada Mayor James Pooten said water supply for inns was adversely affected by the fires as waterlines and some private water sources were damaged.

“The site of forest fires might disappoint visitors, but so far there have been no reports of cancellation of bookings from the inns,” Pooten said.

According to Mendoza, the BFP lacks equipment and personnel to fight forest fires but the task force is expected to provide reinforcement.

While the press briefing was ongoing, Baguio firemen were called to put out a grass fire near the Baguio City Economic Zone at Barangay Loakan here and another fire at Sitio Tuding in Itogon.