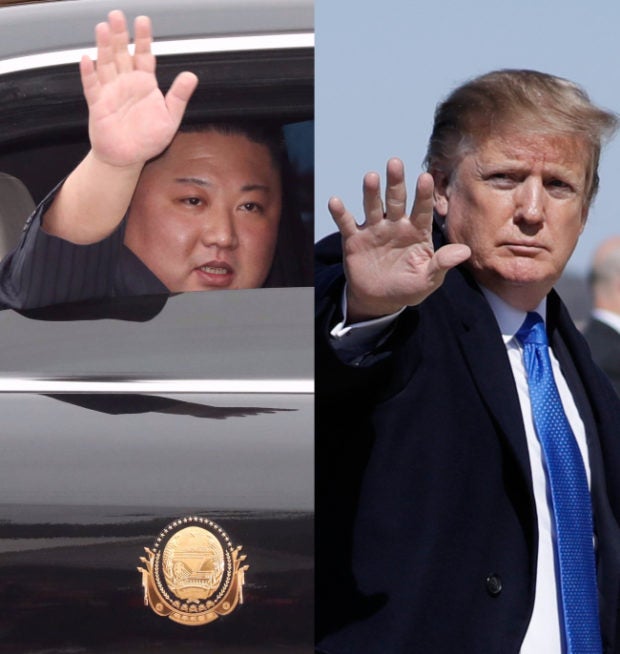 North Korean leader Kim Jong-un waves upon his arrival at the border town of Dong Dang, Vietnam, Tuesday. (L) US President Donald Trump boards Air Force One prior to departure from Joint Base Andrews in Maryland, Monday. Yonhap via The Korea Herald/Asia News Network

HANOI — US and North Korean sides gathered in Hanoi on Tuesday, ahead of official events of the summit between US President Donald Trump and North Korean leader Kim Jong-un set to kick off the following day.

Kim arrived at the Melia Hanoi Hotel at about 11 a.m. (Vietnam time), having traveled from North Korea to Vietnam by train. The trip took about 66 hours from Pyongyang to Vietnam’s Dong Dang Railway Station.

Upon arrival, Kim was greeted by Vietnamese government representatives, and reportedly said that he was “happy and thankful” to Vietnam.

Despite media speculations, Kim did not make any stops en route to the hotel. South Korean media had speculated that Kim might visit a Samsung Electronics facility in Vietnam, or other industrial sites located between Hanoi and Dong Dang.

Kim is accompanied by his top aides including his sister Kim Yo-jong, vice chairmen of the Workers’ Party of Korea Kim Yong-chol, O Su-yong, and the North’s Foreign Minister Ri Yong-ho, and Kim Chang-son, a high-level party official known as the butler to the North‘s ruling Kim family.

The inclusion of O Su-yong, who doubles as the director of the North Korean ruling party’s economic affairs department, has been interpreted as an indication of the emphasis Pyongyang is placing on the economic outcome of the summit.

Kim remained at the hotel until he left for the North Korean Embassy in the late afternoon. Escorted by Vietnamese police, Kim arrived at the embassy at about 5 p.m. and remained there until 7:58 p.m. The North Korean leader was accompanied by his sister and Kim Chang-son. Kim did not immediately go to another schedule, returning to his hotel.

The two leaders are set to begin their two-day summit with a private meeting and dinner Wednesday. According to the White House, Secretary of State Mike Pompeo, White House chief of staff Mick Mulvaney and an interpreter will attend the dinner. Kim is expected to be accompanied by aides matching the US officials.

In all, Kim and Trump are expected to meet for five or more occasions, including summit meetings on Thursday morning and afternoon.

Heading to Hanoi, Trump again took to Twitter to express high hopes for the meeting, saying that North Korea has the potential to “rapidly become an Economic Powerhouse,” on the condition of complete denuclearization.

Trump added, “Chairman Kim will make a wise decision!” He later tweeted that he was looking forward to a “very productive summit” and told US governors that he expected a “very tremendous” meeting.

While Trump remains characteristically dramatic, working-level officials on the ground continued laying the foundations for the summit.

Pompeo, who arrived in Hanoi ahead of Trump, was expected to meet with Stephen Biegun, US special representative for North Korea. There were also speculations that the top US diplomat and Kim Yong-chol may fine tune the summit agenda.