Trillanes on Duterte’s subpoena threat: ‘Just do it’ | Inquirer News

Trillanes on Duterte’s subpoena threat: ‘Just do it’ 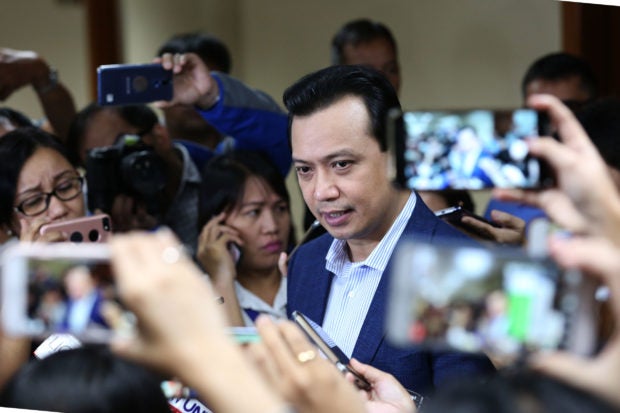 In a speech Tuesday night, Duterte said he would subpoena Trillanes’ mother, whom he accused of having anomalous business transactions with the Philippine Navy when the senator was still in the military.

“Sumobra ka. We will initiate an investigation kagaya mo and I will subpoena your mother sa ayaw mo’t sa hindi. Baka sabihin mong walang power, there is. We also have the contempt power but we have to go to court,” the President said.

“Since September last year, Duterte has been saying that he asked different agencies to investigate the supposed anomalous transactions of my mother. But up to now, he has yet to show even a shred of evidence to prove his baseless allegations,” he said in a statement.

“Now, Duterte is threatening to subpoena my mother. Just do it and let it be another humiliating episode for you like the fake offshore bank accounts you alleged against me,” the senator added.

He was referring to the President’s earlier allegation that Trillanes had bank accounts in Singapore but later admitted that he just “invented” his claim.