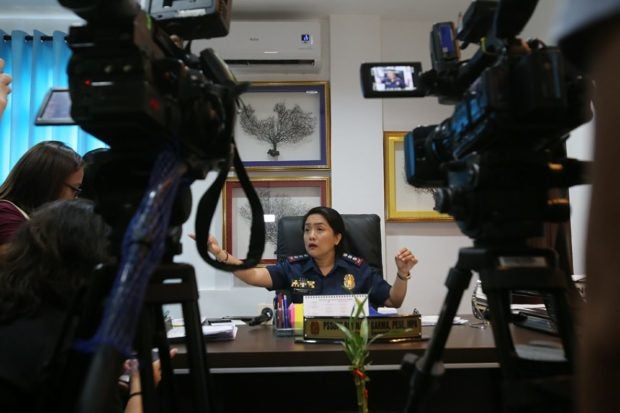 Senior Supt. Royina Garma, Cebu City Police Office director, tells the media about the arrest of two of her policemen for selling a firearm with an expired license. Junjie Mendoza, Inquirer Visayas

CEBU CITY — Two policemen were arrested on Tuesday night for allegedly selling a firearm with an expired license.

The suspects were identified as PO1 Oliver Navarro of the city’s Mobile Patrol Group and PO2 Redzon Baguion of the Fuente police station.

The two policemen were detained at the Criminal Investigation and Detection Group in Central Visayas (CIDG-7) pending the filing of charges for violating the gun ban.

The two will also face administrative charges at the National Police Commission.

Senior Supt. Royina Garma, CCPO chief, said Baguion asked Navarro to sell his firearm to a civilian who turned out to be an undercover policeman from the CIDG-7.

She pointed out that there was a process that must be followed when selling a firearm which the two policemen didn’t comply with.

Navarro and his two friends met up with the undercover policeman outside a hotel on F. Ramos Street in Cebu City.

The three were arrested for gun ban violation after the two civilians were caught with a firearm each.

Navarro later told investigators that the .45 caliber pistol he was trying to sell belonged to Baguion, prompting the latter to surrender to face charges.