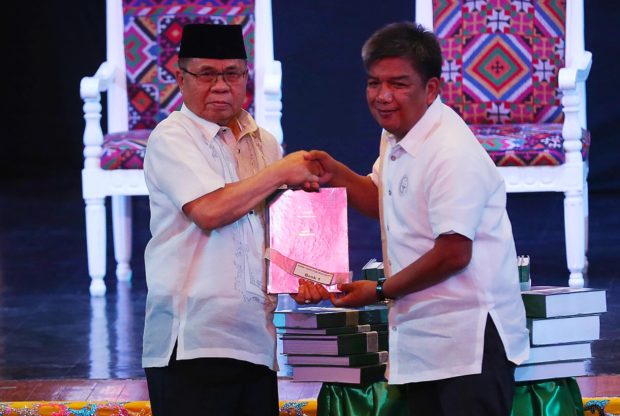 COTABATO CITY — The leader of the country’s largest Moro rebel group finally took over the reins of the expanded autonomous Muslim region in Mindanao on Tuesday in formal ceremonies witnessed by thousands.

“Now the government that we have long dreamed of, fought and struggled for, is finally established in our homeland,” Murad said. “The trust and responsibility over the Bangsamoro government is now in our hands. We are accountable for it to Allah and to our fellow Bangsamoro.”

“Our jihad (was) firstly against our own selves, in addition to the enemies already enumerated, all the ills in governance. Our (new) enemy is graft and corruption, our enemy is manipulation of government, our enemy is nepotism,” he said.

Murad called for continued support in this new struggle.

“You supported us for more than 40 years. We look forward to everyone to support us in the next level of our jihad. We know that without your support, we will not succeed,” he said.

He said success meant that good governance had prevailed in the system.

“Now, I would like to mark this transition beginning today,” he added.

Outside the cultural center, more than 5,000 people watched the turnover proceedings on a huge LED screen.

Murad said the new Bangsamoro region would take responsibility for the education, health, economic development, strategic infrastructure and moral leadership of the people in the expanded Muslim region.

Hataman, who turned over 34 transition documents and the ARMM website to the BARMM, announced he would step down from his gubernatorial post earlier than June 30 to spend more time in his home province of Basilan.

As ARMM governor, Hataman is an automatic member of the BTA and is supposed to serve until June 30, when his term as ARMM governor ends.

“I am at this point where I now want to focus on the communities in Basilan,” he said. “It would be unfair for them and for the BTA if I would be forced to divide my attention.”

Among the documents he turned over to Murad were ARMM briefers, devolution documents, list of officials and personnel, list of liabilities, ARMM legislative issuances from 1990 to 2018 and technical reports.

Murad assured ARMM employees that they would remain in office in the meantime, except those whose terms were coterminous with the elected officials. This assurance was greeted by loud applause.

The interim government will be inaugurated and the BARMM parliament will hold its first session next month. The 80 members of the BTA will continue to serve until the polls for the first elected officials of the new regional government are held in 2022.