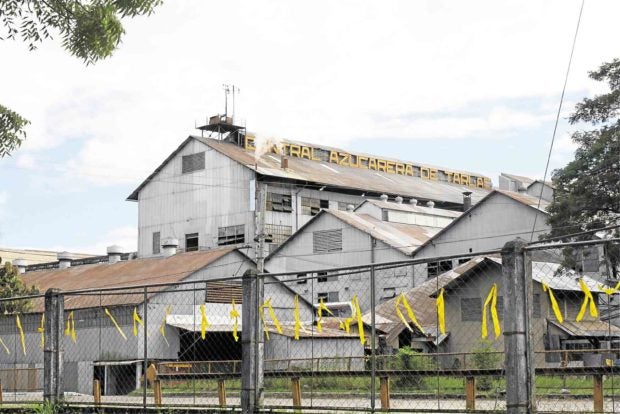 RECOVERY The firm running Central Azucarera de Tarlac has started recovering land which, it says, is outside the coverage of the government’s land reform program in Hacienda Luisita. —TONETTE OREJAS

CITY OF SAN FERNANDO — Even as President Rodrigo Duterte promised to give lands to landless farmers, around 800 families inside Hacienda Luisita in Tarlac province, have been given notices to vacate their premises by the company that operates a sugar mill in the vast estate covered by agrarian reform since 2012.

The Central Azucarera de Tarlac (CAT) gave the families in the subvillages of Obero, Zit, Lote and Camaran at Barangay Central, 60 days to leave and demolish their dwellings, according to notices issued by the Gatchalian and Castro law office, counsel for CAT.

The notices, written in English and Filipino and dated Feb. 18, told residents it was “recover[ing] possession” of properties covered by Transfer Certificates of Title Nos. 3645, 143407 and 143406.

Those land titles were not among the 25 titles covering 4,500 hectares that were placed under compulsory acquisition by the Department of Agrarian Reform (DAR) in 2005.

The acquisition was upheld by the Presidential Agrarian Reform Committee in 2008 and the Supreme Court in 2012, according to the compliance report of the DAR to the high court.

An Inquirer source said lands at Central, located in Tarlac City, were exempted from the coverage of the Comprehensive Agrarian Reform Program through an order issued by former Agrarian Reform Secretary Rosalina Bistoyong.

“Your occupation is without the benefit of any contract of lease and only upon the tolerance and benevolence of the family,” a part of the two-page notice read, which also warned them of legal action should they refuse to leave.

It was signed by Addison Castro, CAT assistant corporate secretary. CAT officials did not reply to calls made by the Inquirer on Tuesday.

But the November 2012 resolution of the Supreme Court enforced the HLI’s promise to give home lots, measuring 240 square meters, to each of the 6,300 beneficiaries who were entitled to get 6,600 square meters of farm lots.

The Unyon ng mga Manggagawa sa Agrikultura (Uma) said it was helping fight the eviction because they had lived at Barangay Central for about 50 years. Many men in the village used to work in the mill.

John Milton Lozande, Uma secretary general, said CAT may have been “emboldened” by DAR’s Executive Order No. 1, which makes it “easier for landlords to convert their lands for nonagricultural uses and escape land reform.”