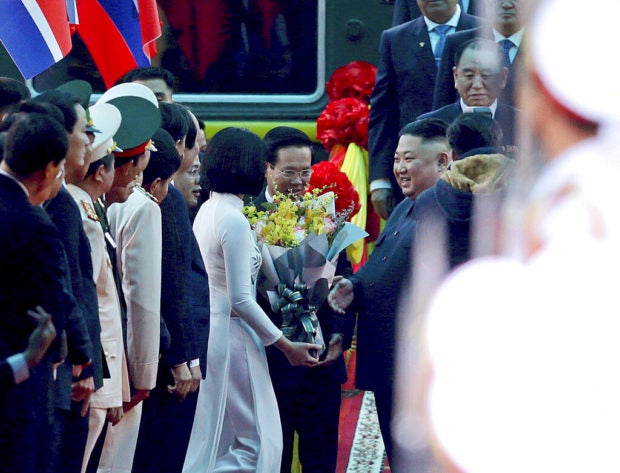 North Korean leader Kim Jong Un (center, right) receives a bouquet of flowers upon arrival by train in Dong Dang in Vietnamese border town on Feb. 26, 2019, ahead of his second summit with US President Donald Trump. AP

DONG DANG, Vietnam  — North Korea has meticulously prepared for leader Kim Jong Un’s summit with US President Donald Trump in Vietnam, but his arrival still had its hiccups.

South Korean media compared a North Korean interpreter to Usain Bolt after he made a desperate sprint to catch up with Kim as the leader walked out of his train to meet waiting Vietnamese officials.

Kim arrived in Vietnam on Tuesday after an almost 70-hour ride in his armored train through southern China.

His green-and-yellow train had to back up after overshooting the red carpet prepared at Vietnam’s Dong Dang station. Minutes later, Kim stepped out of the train and was momentarily alone as he walked toward Vietnamese officials who came to greet him.

Kim’s interpreter wiggled through senior North Korean officials waiting at the train’s door and dashed after Kim, catching up with him just as he shook hands with the Vietnamese officials.

North Korean leader Kim Jong Un has left his hotel in Hanoi for a visit to the North Korean Embassy.

The convoy was escorted by motorcycle outriders as curious spectators and journalists looked on.

Upon arriving at the embassy a short drive away, more bodyguards took up positions alongside his car. Loud cheers could be heard as he entered the compound.

Kim is in Vietnam to meet with US President Donald Trump starting on Wednesday. /ee