US House to vote on blocking Trump emergency 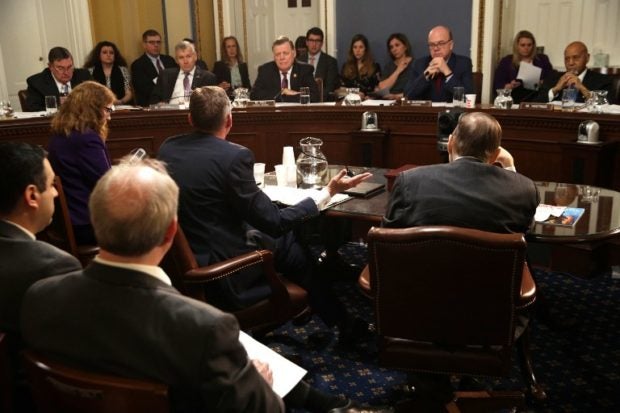 WASHINGTON — US House lawmakers on Tuesday are expected to pass a Democratic measure annulling President Donald Trump’s declared emergency on the southern border, an effort that appeared to earn growing support among Senate Republicans.

Trump’s February 15 emergency declaration gives him access to billions of dollars to construct his wall on the Mexican border, beyond the nearly $1.4 billion that Congress allocated for construction of border barriers.

But the House of Representatives, run since January by Democrats, has the support necessary to terminate the emergency, dealing a stern rebuke to a president controversially seeking to expand his executive powers.

Should the measure clear Congress and reach his desk, Trump would be cornered into issuing the first veto of his presidency, an embarrassing development because the measure seeks to directly rein in the president’s authority.

Trump’s top Democratic rival in Congress warned that his emergency order was tantamount to an unconstitutional attempt to seize executive authority by taking lawmaker’s power to control how federal funds are spent.

“The president’s power grab usurps that responsibility and fundamentally violates the balance of power envisioned by our founders,” said Pelosi, who has noted that the measure already has 226 supporters in the 435-member body.

After clearing the House, the measure would receive a vote in the US Senate. Republicans control the chamber, 53-47, but several senators in Trump’s party returned to Washington after a one-week break to express deep reservations about Trump’s end run around Congress to obtain wall funding.

Trump sought to head them off early Monday, saying he hoped Republicans “don’t get led down the path of weak and ineffective Border Security.”

“Be strong and smart,” Trump tweeted. “Don’t fall into the Democrats ‘trap’ of Open Borders and Crime!”

Trump and the White House have pressed on with plans to repurpose more than $6 billion from other sources, mostly already-allocated funds in the Defense Department budget.

He has repeatedly declared that rampant illegal immigration is fuelling a border crisis, leading to higher crime and strains on public services.

Two key groups — dozens of Republican former lawmakers, and a bipartisan group of former national security officers including secretaries of defense and CIA directors — spoke out strongly against the emergency declaration.

In open letters Monday, they warned of an abuse of the framework of the US Constitution.

“Under no plausible assessment of the evidence is there a national emergency today that entitles the president to tap into funds appropriated for other purposes to build a wall at the southern border,” said the 58 national security officials, who include former secretaries of state Madeleine Albright and John Kerry, and George W. Bush’s undersecretary of state Nicholas Burns.

As pressure in Washington mounted, some Republican lawmakers appeared to buckle.

GOP Senator Thom Tillis said in a column that while Trump is “rightfully frustrated with Congress’s inaction” on border security, the president made a mistake declaring an emergency and Tillis will support the Democrats’ resolution of disapproval.

“I have grave concerns when our institution looks the other way at the expense of weakening Congress’s power,” he wrote in The Washington Post.

Senators Lisa Murkowski and Susan Collins have also signalled their likelihood to support the resolution.

“The emergency course is not one I favor,” Senator Mitt Romney told reporters.

“I don’t think you solve one problem by creating another one, which is taking money out of military construction — and there’s separation of powers (issues) as well,” added Senator Marco Rubio.

“I don’t like it, and my vote will reflect that.”

If all Senate Democrats support the resolution, only four Republicans would be needed for it to pass the Senate.

Trump has said he is “100 percent” certain to issue a veto, deepening a political showdown on Capitol Hill and setting up a series of legal battles.

Republicans have said Democrats likely do not have the votes — two-thirds majorities required in both chambers — to override a Trump veto.