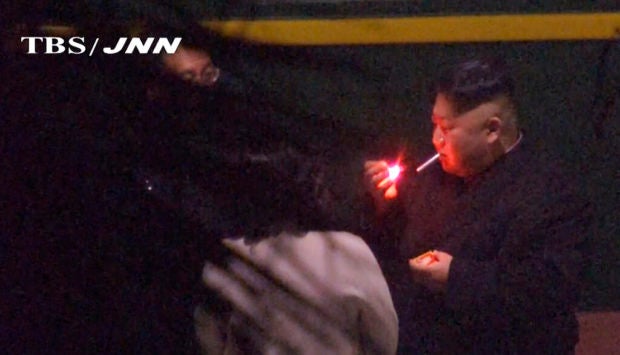 In this image made from Japan’s TBS TV video on Feb. 26, 2019, North Korean leader Kim Jong Un, a habitual smoker, takes a pre-dawn smoke break at the train station in Nanning, China. AP

SEOUL, South Korea — It’s unclear whether North Korean leader Kim Jong Un is going to give up his nukes anytime soon, and the same could probably be said for his cigarettes.

Footage by Japan’s TBS TV showed Kim, a habitual smoker, taking a pre-dawn smoke break Tuesday at a train station in China hours before his arrival in Vietnam for his high-stakes summit with President Donald Trump over resolving the international standoff over the North’s nuclear weapons and missiles.

The video showed Kim puffing a cigarette and talking with North Korean officials at China’s Nanning rail station. A woman who appeared to be his sister Kim Yo Jong, also a powerful individual in North Korea, is seen holding a crystal ashtray.

Kim arrived in Vietnam on Tuesday after an almost 70-hour train ride that cut through southern China.

Despite pushing a nationwide anti-smoking campaign in North Korea, Kim is frequently seen with a cigarette in his hands. In 2017, North Korea’s state broadcaster showed him casually smoking in front of one of his liquid-fuel intercontinental ballistic missiles as it underwent preparations for a test launch. /ee