Bishops call on people to seek common good in May polls 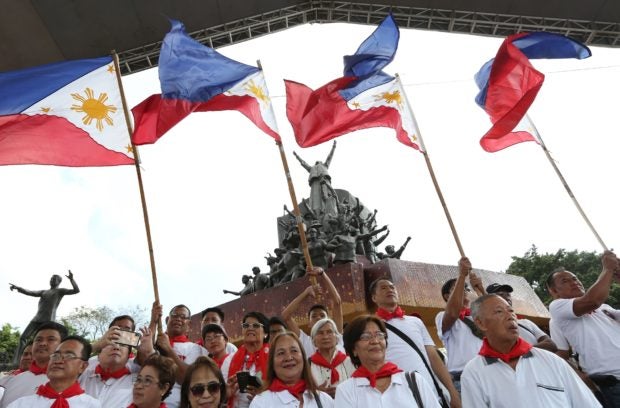 WE BELONG Members of Liga Independencia Filipinas join the sparse crowd at the 33rd commemoration of the Edsa People Power Revolution at the People Power Monument. NIÑO JESUS ORBETA

The celebration of the 33rd anniversary of the Edsa People Power Revolution on Monday was a quiet affair: no VIPs, no crowds.

But an important and timely message to all Filipinos was issued from the Eucharistic celebration at the Edsa Shrine in Quezon City: “Seek the common good” in May’s midterm elections.

It came through a pastoral letter from the Catholic Bishops’ Conference of the Philippines, written by Davao Archbishop Romulo Valles, president of the group, and read during the homily by Fr. Lazaro Abaco.

“In our country today, the checks and balances in the government are being undermined. So far, the Senate is the institution in the government that is holding out as our country is inching toward total control. It is very crucial therefore that we elect public officials who are principled, courageous and who have the common good as their main concern and not their own political interests,” the bishops said in their message.

The bishops went on to warn against the dangers of adopting the surreptitiously passed House version of the draft federal Constitution.

“We do not see the proposed revised Constitution approved by the [House of Representatives] as an improvement of the 1987 Constitution but is a self-serving attempt of present politicians to remain in power,” they said.

The campaign for the midterms is in full swing and so far neither administration nor opposition candidates have dared push the draft House constitution that would abolish the position of Vice President in a presidential-bicameral federal government and lift term limits but which the senators in the 17th Congress have rejected as “dead on arrival.”

The bishops sought to correct the misconception that the religious should not be political, saying “Christians are also encouraged to engage in principled partisan politics.”

“This,” they said, “means that they can campaign for good candidates as an exercise of their Christian faith.”

Christians, they said, need not shout to be heard; they can also “whisper prayers to the heart of God to relay the people’s sentiments to government leaders.”

The commemoration of the February 1986 popular revolution that toppled dictator Ferdinand Marcos from power has lost luster and grown dull over the years as the key figures in the uprising that led to the restoration of democracy in the Philippines have died or grown old.

Gone now are the yellow-clad crowds who descended on Edsa with the same fervor of the millions who thronged the belt highway during those four days in February 1986 to bring an ignominious end to the iron-fist rule of Marcos.

The sparse crowd that turned up for the commemoration on Monday was composed of government workers, mostly from the Metropolitan Manila Development Authority and local governments, and members of civic organizations.

They were not dressed in the signature yellow of Corazon Aquino, the widow of assassinated opposition leader Benigno Aquino Jr. who was swept into power by the revolution.

For the first time in 33 years, former President Fidel Ramos, one of the key figures in the revolution, was absent from Monday’s event.

Pastor Saycon, a member of the Edsa People Power Commission, said Ramos, 92, skipped the event because he was not feeling well.

President Rodrigo Duterte, an admirer of Marcos, again skipped the event, but issued a message late Sunday reminding Filipinos to appreciate “what we lost and what we reclaimed.”

He said the Edsa People Power Revolution had shown to the world that “history can be rewritten without the need to resort to violent means.”

“As the entire nation prepares for the upcoming midterm elections this May, let us always remember how this historic revolution restored our power to collectively chart our future through the ballot,” the President said.

The Presidenhas not attended a single Edsa celebration since coming to office in 2016.

Despite waning interest in the event, Bayan Muna Rep. Carlos Isagani Zarate said the ouster of Marcos was “a victory of our people already safely etched in our history.”

Akbayan Rep. Tom Villarin called on the nation to keep the People Power Revolution’s flame alive and never to relegate the event to “a mere footnote in history.” —Reports from Jaymee T. Gamil, Julie M. Aurelio, Jeannette I. Andrade and DJ Yap