A walk to remember: UP organizes Commune Tour 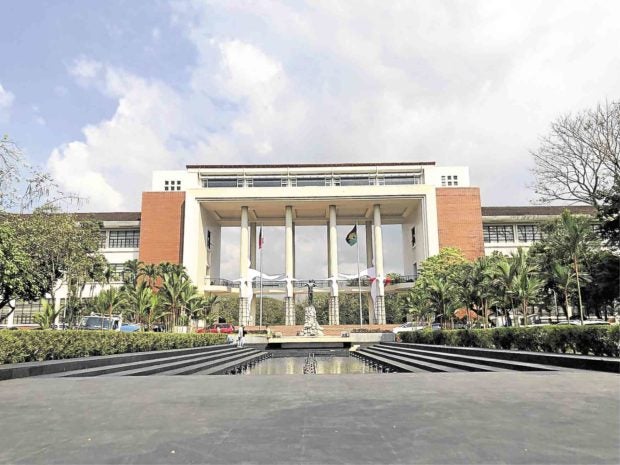 GROUND ZERO Quezon Hall, the epicenter of the student-military standoff during the Diliman Commune, is the first stop of the walking tour. It houses an iconic symbol of self-sacrifice, the Oblation, that embodies the Communards’ “fight for freedom.” —MATTHEW REYSIO-CRUZ

Fifteen years before a sweeping euphoria coursed through Edsa in 1986, ushering in the tidal wave of democracy, a very different kind of protest had caused a seismic stir.

However, the one staged from Feb. 1 to 9, 1971, was no mere uprising, but a complete transformation of the University of the Philippines (UP) Diliman campus into an independent, self-sufficient republic — a revolutionary utopia that would be known as the Diliman Commune.

Now, a free walking tour offered at 2:30 p.m. every Tuesday until March 31 is giving UP students and the general public a chance to relive the commune — remembered as one of the premartial law era’s most potent expressions of resistance against the late dictator Ferdinand Marcos.

“There was a very strong feeling that we were losing this historical war of memory,” UP History Department Prof. Michael Bernal told the Inquirer.

To combat that feeling of defeat after Marcos’ 2016 burial at Libingan ng mga Bayani, activities like the tour were hatched.

Bernal wrote the content of the Commune Tour, which was organized by the Asian Institute of Tourism in line with UP Diliman Arts and Culture Month.

Aside from giving participants a chance to get acquainted with the campus’ heritage sites and works by national artists, he said it was an opportunity for two increasingly elusive pursuits — “solitude and contemplation.”

“We’re dealing with memory and place,” Bernal said. “It’s important to remember the past, to celebrate those people who really valued freedom and fought for that which we still enjoy today.”

But with powerful revisionist forces trying to cast doubt on the antidictatorship struggle, bookended by the First Quarter Storm and Diliman Commune in the 1970s and Edsa People Power Revolution in 1986, the need to revisit these seminal moments are more urgent than ever.

The commune initially began as a show of support for jeepney drivers who were on strike to protest rising fuel prices. Students began barricading entrances to the university, and the use of military might to try and dismantle those barricades quickly, and violently, raised the stakes.

The barricades, however, didn’t just serve to keep out the Philippine Constabulary’s Metropolitan Command. It also enabled the campus to be reinvented without suppression or intrusion, a task that was as much about creative prowess as it was about staunch militancy.

The Communards, as they called themselves, rechristened UP Diliman “Malayang Komunidad ng UP Diliman” and began renaming the campus’ buildings after revolutionaries. They took over the dzUP radio station and the UP Press, which they used to publish “Bandilang Pula,” the commune’s official publication.

“It started with a jeepney strike and eventually turned into an all-out affair of resisting the government,” Bernal said. This was reminiscent of the 1871 Paris Commune, when the working class successfully installed its own revolutionary government that would last over two months.

The walking tour Bernal crafted begins at Quezon Hall, the neoclassical administration building at the end of University Avenue — the epicenter of student-military action during the commune. It is fronted by the famed Oblation, a symbol of the “willingness to sacrifice oneself for the country.”

Quezon Hall was also the site of an act of violence that marked a turning point on the commune’s first day. Mathematics Prof. Inocentes Campos, frustrated over his failure to get past the blockades, took a .22-caliber rifle from his car and fired at students, hitting freshman Pastor Mesina Jr. on the forehead.

“The mood was really outrage and anger,” said former Social Welfare Secretary Judy Taguiwalo who was a student at that time. Mesina’s shooting was compounded by raids that soldiers conducted on all-girl dormitories such as Taguiwalo’s, she told the Inquirer. “It was an all-out invasion of privacy.”

From Quezon Hall, the tour moves to Plaridel Hall, renamed “Amado Hernandez Hall” during the commune after the poet and labor leader, then proceeds under towering acacia trees to Melchor Hall. One of the tallest buildings in UP Diliman, its rooftop was used by students  to launch “kwitis” fireworks at military helicopters that attempted to land on campus.

The next stops on the tour are some of UP Diliman’s most iconic areas, making clear the breadth of support for the nine-day uprising. These include Palma Hall, where chemistry professors created their own pillboxes, Molotov cocktails and flamethrowers to counter the military, and the site of the old Faculty Center, where teachers would hide students being pursued by the police.

The tour then snakes through the all-girl Kamia and Sampaguita Residence Halls, where food was prepared for the Communards, before finishing at Vinzons Hall, a hub of student activity as the home of the University Student Council and Philippine Collegian.

This hall, named after prominent student leader Wenceslao Vinzons, holds the tour’s biggest takeaway—the need for the youth to be at the forefront of any struggle, Bernal said.

Always at the frontline

“If you think about Gregorio del Pilar, Emilio Jacinto, Andres Bonifacio—these are people in their early 20s,” he said. “Students should be the first ones to guard against efforts to diminish our rights and freedoms.”

After the 1972 declaration of martial law, military personnel were stationed at UP Diliman, engulfing the campus in an eerie silence — the vibrant commune’s perfect mirror image.

But the students, Bernal said, “never really lost their aspirations,” as evidenced by the bloodless revolt that would topple Marcos years later. He added: “We can learn from that very much up to this day. We cannot let anyone, whoever he or she may be, trample on our rights, on our freedom.”

“The Diliman Commune was not the first, or even the last time the UP community came together to protest what they saw as injustices,” Taguiwalo said. “There will be instances when your voice is in the minority, but you persist because you know that you are on the side of justice.”