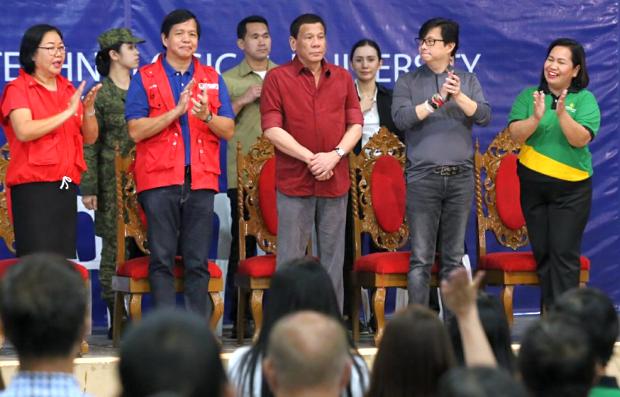 President Rodrigo Duterte (center) stands on a stage set up at the Cebu Technological University in Cebu City before distributing cash gifts to more than 1,500 beneficiaries on Sunday, Feb. 24, 2019. With the President (to his left) are Social Welfare Secretary Rolando Bautista and Secretary Michael Dino, presidential assistant for the Visayas (to his right). (Photo by JUNJIE MENDOZA / Inquirer Visayas )

CEBU CITY — President Rodrigo Duterte is not done yet with Catholic Church leaders.

In a profanity-laden speech on Sunday evening, he said the Vatican summit on clerical sexual abuse just proved that there was truth to his attacks against priests and bishops in the country.

“There are thousands of abuses that were not corrected by the Church,” he said, speaking in Cebuano, at the Cebu Technological University in Cebu City, where distributed cash gifts under the unconditional cash transfer (UCT) program of the Department of Social Welfare and Development (DSWD).

“For me, it would be better to allow priests to marry. If the priest is gay, then he should still be allowed to engage in same-sex marriage. That’s the solution to the problem,” he added.

In a Mass to end the Vatican summit on Sunday, Pope Francis challenged bishops to an “all-out battle” against clerical sexual abuse, saying the Church needed to take “every necessary measure” necessary to end the problem.

The President said he would have remained mum about the problem, especially that he was in Cebu — the biggest archdiocese in the country and the cradle of Christianity in the Far East. But he wanted to get back at the priests who kept on criticizing his bloody war on drugs.

“I’m sorry. I don’t want to fight with them,” he said. “But they were the first to attack me. Let me ask you then where the money you collected went. You keep on collecting. What for? For your women? If you attack me first, then this is what would happen.”

Aside from lashing out at bishops and priests, the President also reiterated his stance against some Catholic teachings, including the existence of hell and how God allowed sin and death to destroy mankind.

“God created a wonderful world, but how could he allow man to be tempted? And then he created what they called hell. That is foolishness,” he said.

The President arrived at the venue at 7:53 p.m. — about an hour late for the event.

Then, for about two hours, he delivered an address that was laden with attacks against Catholic Church leaders and its teachings.

At one point, he called on Filipinos to use pills and engage in ligation as forms of birth control — practices forbidden by the Catholic Church.

“I’ll give you P10,000 so that your sexual organ will be cut off,” the President said in jest.

In some portions of his speech, he also mentioned his ongoing war against narcotics, saying it would be more relentless in the coming days.

“This is the most dangerous time to engage in illegal drugs,” he said. “Here in Cebu, the problem has not died down. So be careful, especially in Talisay City. Please do not destroy my country because I will kill you.”

“To the Commission on Human Rights, don’t ever help. I will finish this problem in three years,” he added. “I will kill all those engaged in drugs. In three years, I will no longer be president. The presidency is God’s gift so let us not waste it. I will use the gift of the presidency given to me by God to get rid of you.”

On Sunday, Duterte gave cash gifts to about 1,500 people classified as the country’s poorest to help them cope with rising prices of goods brought by the implementation of the Tax Reform for Acceleration and Inclusion (TRAIN) Act.