11,500 people wait for hours for Duterte arrival in Cebu City 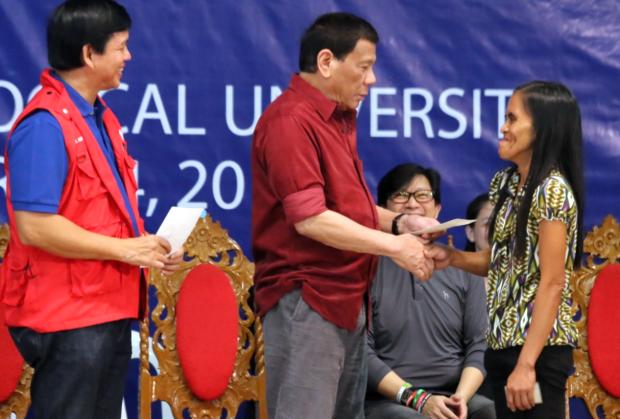 President Rodrigo Duterte hands over a cash gift to one of more than 1,500 beneficiaries at the Cebu Technological University in Cebu City on Sunday, Feb. 24, 2019. With the President are Social Welfare Secretary Rolando Bautista (left) and Secretary Michael Dino, presidential assistant for the Visayas. (Photo by JUNJIE MENDOZA / Inquirer Visayas )

CEBU CITY — At least 11,500 people in two venues waited for hours for President Rodrigo Duterte to arrive here for two events on Sunday.

For the first event, at least 1,500 beneficiaries of the unconditional cash transfer of the Department of Social Welfare and Development (DSWD) had been waiting for the President at the Cebu Technological University on Palma Street in Cebu City since 3:00 p.m.

The event was supposed to start at 6:00 p.m. but as of 7:24 p.m., the President had not arrived. Organizers didn’t explain the delay.

Some beneficiaries were seen napping on the armchairs inside the CTU gymnasium while waiting.

Finally, the President arrived at the Cebu Technological University at 7:53 p.m.

For the second event, the President was scheduled to proceed to Plaza Independencia, which is about 2 kilometers away, to attend the rally of his senatorial candidates.

At least 10,000 were waiting for him at the plaza located near the pier area in downtown Cebu.

This would be the first rally of the Partido Demokratiko Pilipino-Lakas ng Bayan (PDP-Laban) in Cebu, which has the biggest voting population at more than three million.

The President won in Cebu during the 2016 presidential polls even if most of the local leaders were allied with and had supported the Liberal Party candidate, former Interior Secretary Mar Roxas, who is now running for senator.

While waiting for the President, several senatorial bets of the PDP-Laban delivered their speech to explain their platform of government.