No high walls for ‘jailed’ boys 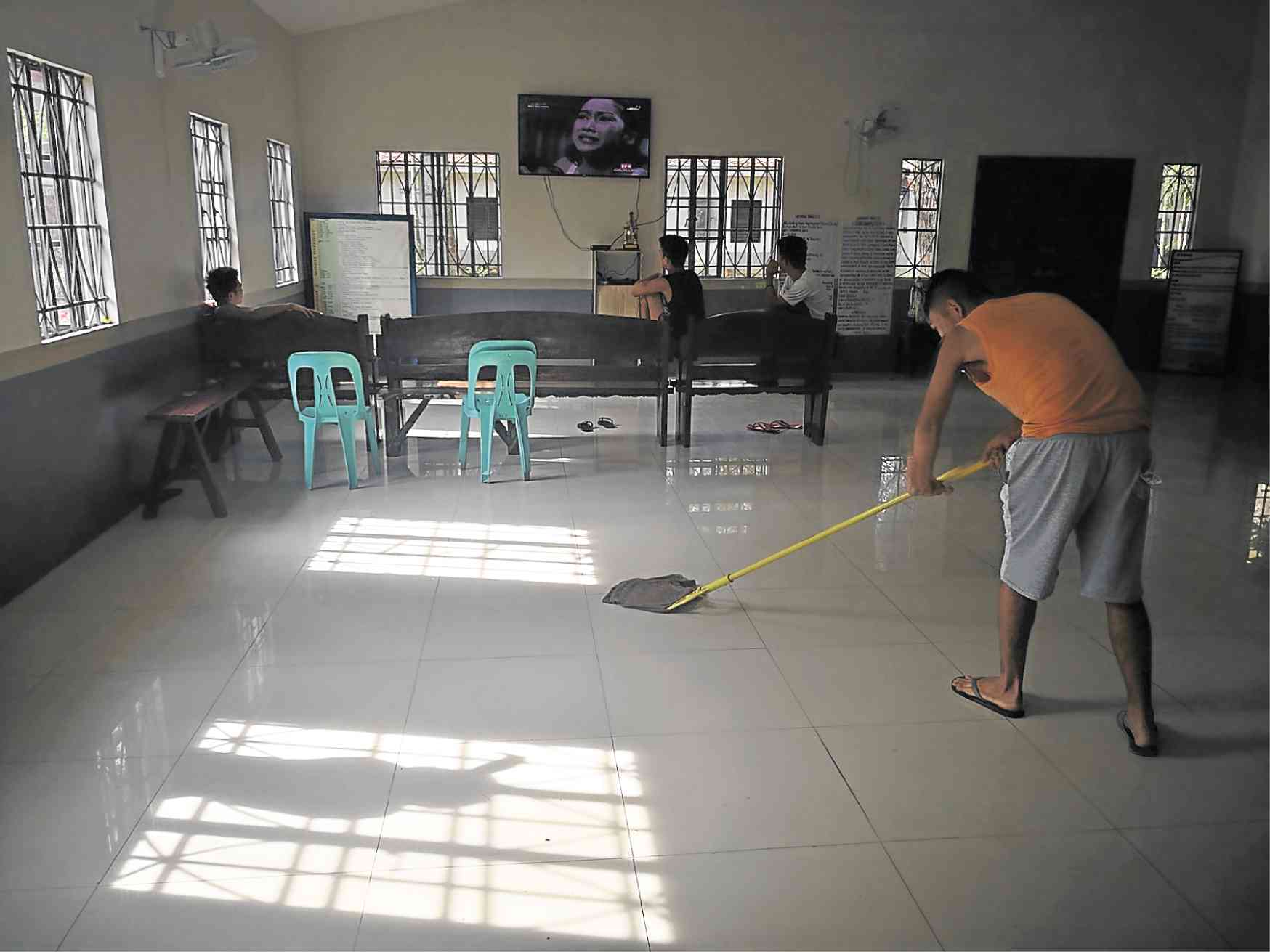 OPPORTUNITY FOR LEARNING Residents of National Training School for Boys (NTSB), many of them out-of-school youth, are given the opportunity to complete basic education and technical-vocational courses. —PHOTOS BY CLIFFORD NUÑEZ

TANAY, Rizal — Jayson was roused from sleep one early morning at Bahay Pag-asa, a local government child care center in this town in Rizal province. “Your brother’s here,” he was told.

“I got up quickly and saw him sleeping near my feet. He was so filthy. I cleaned him up, scrubbed off the grime, and fed him,” Jayson recalled.

Jayson’s brother was taken to Bahay Pag-asa after stabbing someone during a street fight in Metro Manila. Jayson arrived months ahead of his brother after being charged with rape.

“My friend’s mother accused me of raping her daughter,” said Jayson, now 18. He clasped his hands as if to hide a tiny tattoo he acquired from joining a gang in Muntinlupa City.

Since the boy was only 14 then (below the current 15 minimum age of criminal responsibility, or MACR), Jayson’s brother was eventually released back to their parents — a construction worker and a laundrywoman, who later moved to Lucena City in Quezon province.

Jayson, who committed the crime at 16, had to be transferred for rehabilitation to National Training School for Boys (NTSB) in Tanay.

“Whenever I’m allowed a phone call, I talk to him (brother). I tell him to be good and to go to school. I tell him I am happy here, but it must be happier there because he’s with our parents,” Jayson said.

The Juvenile Justice and Welfare Act of 2006 (Republic Act No. 9344) had set the  MACR at 15. Under RA 9344, a child under 18 who is found guilty of an offense automatically serves a suspended sentence.

This means that instead of serving jail time, children in conflict with the law (CICL) go through a reformation program that prepares them for their return to their families and communities.

The Supreme Court, in June 2018, also prohibited judges from committing minors to jails.

But President Rodrigo Duterte has frequently lashed out at the law authored by Sen. Francis Pangilinan, blaming it for what he claims to be a rise in crimes by syndicates that use minors to escape prosecution.

Last month, the House of Representatives approved the bill lowering the MACR from 15 to 12 years old.

The original proposal had set the age of liability at 9 years old but the House leadership raised this to 12 amid public furor over the move.

NTSB was once known as Tanay’s “Boys Town,” a name that connotes a horrible detention for bad boys.

After assessing the child — a process that usually takes two to three years as to whether he shows good behavior, developed skills for potential employment, and has a family capable of taking him back — NTSB recommends the dismissal of his case, clearing away any criminal record.

“This is not a jail but a training school. You don’t see anyone here with handcuffs,” said Hayde Dinglasa, the center’s head.

Built in 1969, NTSB occupies an 18-hectare property that it shares with a shelter for the elderly at the lush and uphill Barangay Sampaloc. It is right next to an Army camp, though the soldiers are not to interfere with the institution’s affairs.

NTSB is managed by the Department of Social Welfare and Development (DSWD) for child offenders aged 15 and above from Metro Manila and Calabarzon (Cavite, Laguna, Batangas, Rizal, Quezon) region.

After the government decentralization, an equivalent facility, or the Regional Rehabilitation Center for Youth, was built in every region, while the girls went either to Marillac Hills in Muntinlupa City or to Home for Girls and Haven for Women in the provinces.

“Only those [whose cases are] with court decision, meaning found guilty beyond reasonable doubt and proven to have acted with discernment, are taken here,” Dinglasa said. On the other hand, child offenders below 15 or those with ongoing trials must stay at Bahay Pag-asa for short-term residential care.

Dinglasa is aware of proposals lowering the MACR. She worries that this may mean more and younger CICL ending up in the dismal, crowded Bahay Pag-asa.

This may also mean more CICL taken to the already full NTSB.

“The LGUs (local government units) might say, ‘We don’t have a Bahay Pag-asa and so we take them to you.’ No, we stand our ground. [We’ll take in] only those on suspended sentence,” Dinglasa said.

The law requires LGUs to build 114 Bahay Pag-asa each in every province and highly urbanized city, but data from the Juvenile Justice and Welfare Council (JJWC) showed only 60 (five already ceased operating) were put up.

The standard ratio should also be one social worker to every 25 CICL (1:10 when intensive intervention is required).

“This … is not followed in some [Bahay Pag-asa]. In some, a social worker who also acts as the head of the center handles almost 100 CICL cases,” the JJWC said in its briefer.

Light drizzles, one afternoon at NTSB, kept a group of boys waiting for their turn at the basketball court. Others in uniform, a plain white polo shirt paired with trousers, headed back to their cottages after their class. 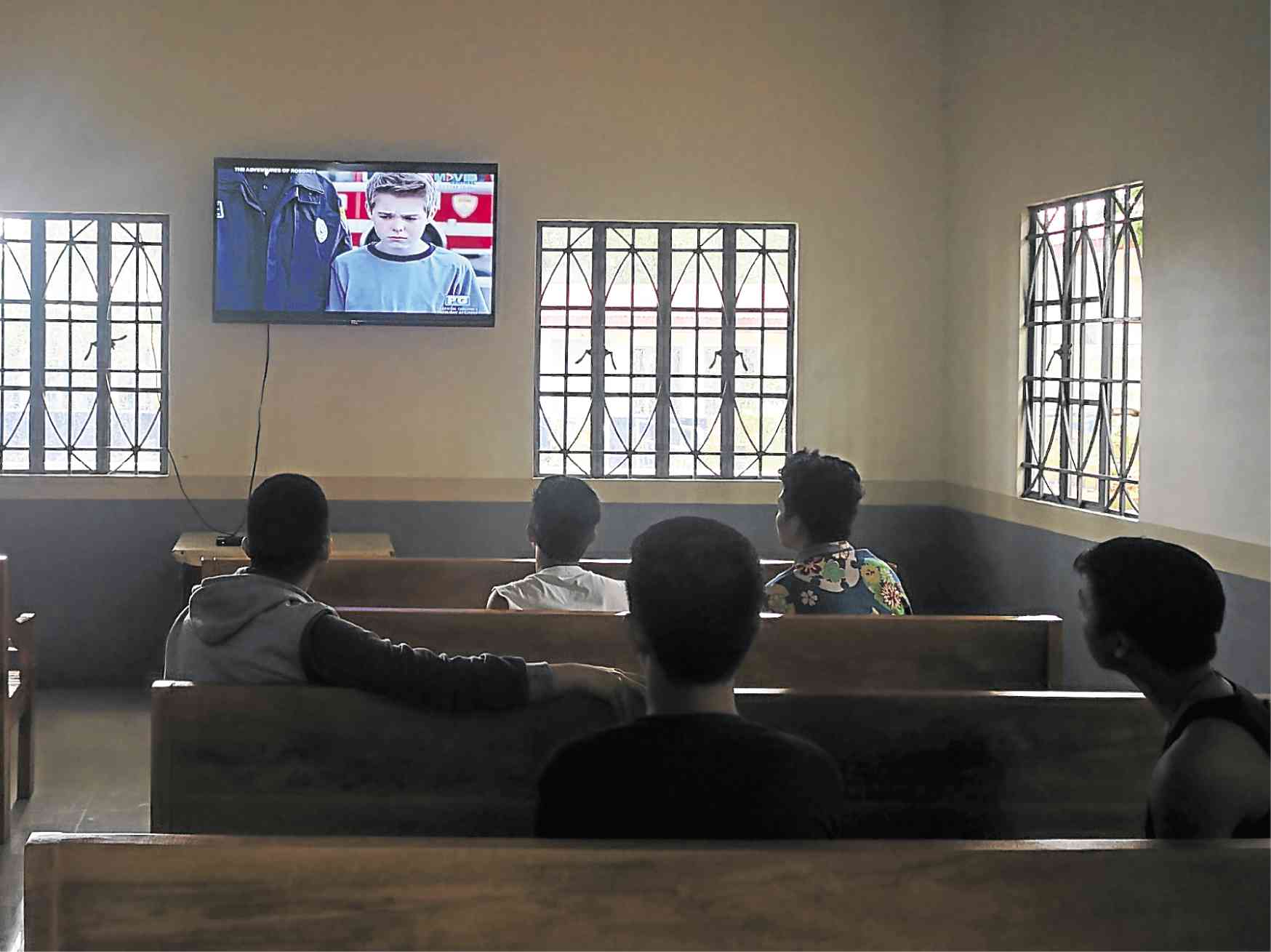 TEMPORARY HOME Each cottage at NTSB houses up to 50 residents. The center may expand its facilities to prepare for younger residents, once the law lowering the minimum age of criminal responsibility is enacted.

There are five “cottages” or quarters—each one named after a national hero—with a common bathroom, individual beds, individual lockers, and a flat-screen television set. Ideally, each cottage accommodates only up to 50 residents.

Security guards are unarmed and there are no prison-like walls.

NTSB also has a church for Sunday service, a large vegetable garden, a school with 13 teachers from Jose Fabella Memorial School, and training rooms for technical-vocational courses, such as welding, wellness massage and soap-making.

“As our former [DSWD] secretary said, no matter how high you build the wall, the child would escape if he wanted to,” Dinglasa said. “But if you treat them well, they’d stay,” she added.

No wonder why Alvin, 24, prefers to stay at NTSB even after completing the vocational courses. He said he was preparing to go to college to become a civil engineer.

“[This institution] taught me a lot. [My stay here] is not something I would hide from my children in the future,” he said.

Alvin was 15 when he got involved in a gang war in Mandaluyong City. He stabbed a member of the rival gang who later died.

NTSB currently houses 261 residents, 65 percent of them from Metro Manila. The majority also came from poor families and most of them “broken or dysfunctional,” said resident psychologist Lucila Larracas.

NTSB records showed that most boys were charged with theft or robbery, followed by crimes against persons (rape, murder and homicide), and then illegal drugs.

At 17, Carlo, whose parents rented out tricycles in Manila, was arrested for theft. Tall and stocky for his age, the arresting officer thought he was 18 and detained him at the Manila City Jail. It was only after some time proving to court that he was then a minor that Carlo was transferred to Manila Youth Reception Center and later to NTSB.

“[In jails] the younger ones always end up the ‘atsoy’ (a term for houseboy). I’d ask them to give me a massage, play with my body, those sort of things. Not to brag, but when I was bored, I’d pick up a stick and poke their heads with it or put [toothpaste] near their eyes. They’d never fight back anyway,” he said.

Larracas said Jayson was also a victim of school bullying and Carlo had issues managing his anger, probably worsened by his stay at the city jail.

According to her, a person’s maturity and personality development may take up to 25 years. “Rather than being reactive [to the situation], why don’t we [propose] preventive measures?” she asked.

“This institution helped me become a changed person. But I still ask myself, ‘Is this enough? Am I good enough to be a parent?’” Carlo said.

NTSB joins calls not only to improve the Bahay Pag-asa facilities but also to strengthen family values at the grassroots level as well.

According to Dinglasa, some municipalities have few CICL because they have a strong program for families against poverty.

“When a child does something wrong, he is not fully aware of its consequences. He thinks it’s just play. When he picks up a gun, whose fault is it? Part and parcel, the family and community are at fault,” Dinglasa said.