Ex-President: If you dislike admin, vote for Otso Diretso 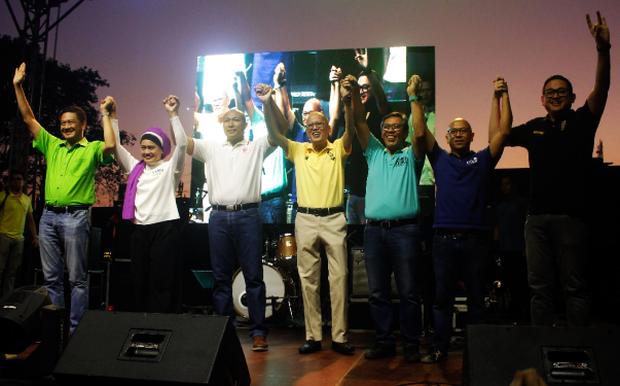 MANILA, Philippines — Former President Benigno Aquino III on Saturday called on voters disgruntled with the Duterte administration to pick senatorial candidates from the Otso Diretso slate in the May 2019 elections.

If candidates backed by President Rodrigo Duterte would win in the upcoming elections, it would send a signal that he was steering the country in the correct direction, Aquino warned during a program at the People Power Monument.

[Where are we headed? Midterm elections: If you vote for allies of the administration or those whom they are endorsing, it’s like you’re saying that what they’re doing is right. So keep on doing it and give more effort to it.]

[But if you’re not in agreement, then let’s choose what’s clear. This is straight, Otso Diretso.]

According to the former president, the Otso Diretso candidates are unlike others who would base their stand on mere popularity and convenience.

[These eight candidates will stand firm, will face what has to be faced — not only in this campaign, not only in the day of counting ballots, but most important, when you put them in office.]

Aquino also took a swipe at candidates who were endorsed by the administration and yet have maintained independence, comparing them to the Otso Diretso slate whom he claimed were firm in denouncing the policies of the President.

[You can’t allow the administration to endorse you and then say: I was only endorsed, but I’m against what they’re doing. That sounds vague. If you accept the endorsement, it means you agree with them.]

[So it’s up to you. If they still win, I will be the first to say to myself: We’ve been fooled twice situation. It’s really a shame on us.] /atm