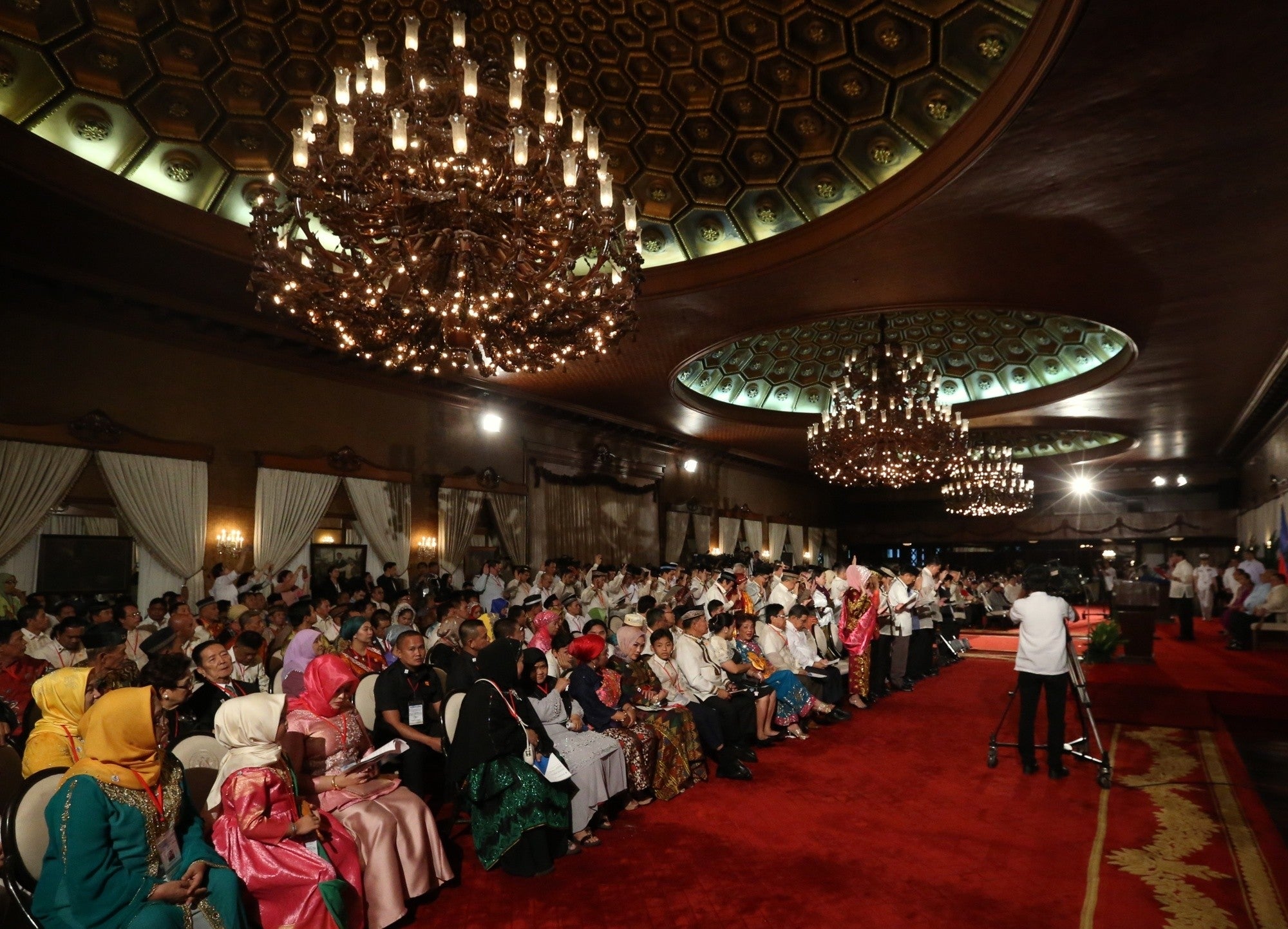 REGIONAL PARLIAMENT Members of the Bangsamoro Transition Authority gather for their oathtaking in Malacañang on Friday. —LYN RILLON

MANILA, Philippines–President Rodrigo Duterte on Friday appointed the chief of the largest Moro rebel group as head of the transition government that will run a new autonomous Muslim region, taking another step in sealing a peace accord to end decades of insurgency in the country’s troubled south.

In a ceremony where he announced the appointment of members of the Bangsamoro Transition Authority (BTA), Mr. Duterte called on the interim government to “always embody the dreams and aspirations of the great men and women who came before you and fought for the recognition of your right to determine your future.”

“As you lead this new region toward a brighter tomorrow, I ask you never to waver in your commitment to build an institution that is founded on the rule of law, the promotion of good governance and the defense of our most cherished democratic values,” he added.

Several of Murad’s top commanders long wanted for deadly attacks were given safety passes to be able to travel to Manila and join the ceremony, including Abdullah Macapaar, who uses the nom de guerre Commander Bravo.

During the ceremony, the President received the Commission on Elections’ certification declaring the BOL’s ratification, and the expansion of the BARMM’s territory to include Cotabato City and 63 barangays in Cotabato province.

Mr. Duterte said the creation of the BARMM was not only the fulfillment of his campaign promise but also “the realization of all our dreams and end long decades of armed struggle that hindered the growth of the region which I also consider my home.”

He said that like any other Mindanaoan, he wanted to see an end to the violence when government and rebel forces were “counting our victories, not by the progress or development of the place but by the dead bodies that were thrown around.”

“The road to peace may be long and rough, but I am glad that we have finally reached its endpoint,” Mr. Duterte said.

Murad vowed to lead the interim government and make it “promotive, responsive and protective” of the Bangsamoro, the “lumad” and the settlers in Mindanao.

“We have fought, sacrificed and struggled for a government that would be reflective of our system of life, and a governance that is suitable and acceptable to the Bangsamoro,” he said in his message.

Murad said those who ratified the BOL “set the highest expectations” for the BTA. “They deserve no less than a government that can live up to those expectations.”

Within the first 60 days of the transition period, Murad has to submit to the BTA a proposed transition plan and its schedule of implementation, which the BTA must vote on within 10 days.

The new Muslim region will hold the polls for its first set of elected officials in 2022 at the same time as the national elections. The BTA will be dissolved after the polls.

In his brief speech, Mr. Duterte reminded the BTA to “always work for the best interest and welfare not only of the Bangsamoro people, but every Filipino who lives in that region.”

“I trust that you will oversee the transition period to the best of your abilities, especially in the decommissioning of firearms and former combatants,” he said.

“The dream that we have fought for is now happening and there’s no more reason for us to carry our guns and continue the war,” rebel forces spokesperson Von Al Haq told The Associated Press (AP) in an interview ahead of the ceremony.

The Philippine and Western governments and the guerrillas see an effective Muslim autonomy as an antidote to nearly half a century of Muslim secessionist violence, which the Islamic State group could exploit to gain a foothold. —WITH A REPORT FROM INQUIRER RESEARCH AND AP