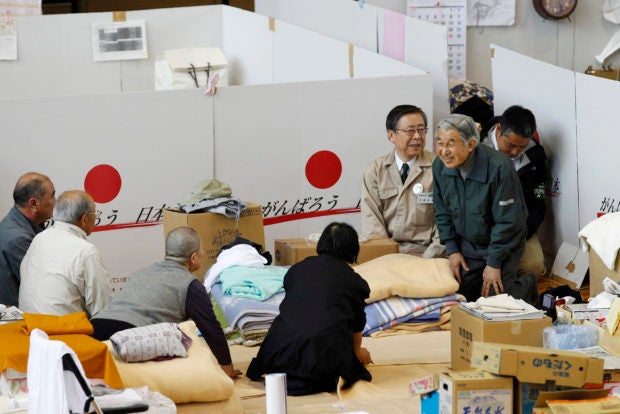 FILE – In this May 11, 2011, file pool photo, Japan’s Emperor Akihito, right, talks to evacuees at a shelter for people who fled their houses because of radiation fear by the March 11 tsunami-crippled Fukushima Dai-ichi nuclear power plant in Fukushima, northeastern Japan. Japan’s Emperor Akihito has devoted his 30-year reign to making amends for a war fought in his father’s name, while adapting the 1,500-year-old monarchy’s traditions to draw the Imperial Family closer to the public. Akihito’s subtle public comments and insights from his classmates show him to be determined but also open to new ideas. He’s shown a keen awareness of his duties. (AP Photo/Shizuo Kambayashi, File)

TOKYO — Japan’s Emperor Akihito has devoted his 30-year reign to making amends for a war fought in his father’s name, while adapting the 1,500-year-old monarchy to draw the Imperial Family closer to the public.

Whether kneeling beside Empress Michiko to speak intimately with disaster victims, or reciting his own poetry, Akihito has won deep affection among his people.

The 85-year-old emperor’s true feelings are impossible to know, but his nuanced public comments and insights from his classmates show him to be a determined man open to new ideas and keenly aware of his duties.

“I think he has learned how to put himself into other people’s shoes, and that’s where his activities as emperor, such as his trips to pray for the war dead and visits to disaster victims, are coming from,” Oda said in a recent interview with The Associated Press.

“He would never do anything irresponsible, and at the same time he is so considerate to other people.”

Akihito’s Heisei era will end when he abdicates on April 30 in favor of his elder son, 58-year-old Crown Prince Naruhito, beginning a new, as yet unnamed era.

The emperor cited his deteriorating health as his reason for stepping aside. While his official duties have been scaled back somewhat, he still receives visiting dignitaries, attends ceremonies and makes official visits. Inside the palace, he also performs private rituals of Shintoism, the indigenous religion intertwined with Japan’s imperial family.

At his advanced age, Akihito no longer plays tennis as often as he once did. He last played with Oda two years ago. To keep fit, he Akihito reads a book while sitting straight, with his legs tucked beneath him in traditional “seiza” style, for an hour daily, Oda says.

Akihito assumed the throne in January 1989 after the death of his father Hirohito, the long-serving emperor whose reign spanned World War II and Japan’s postwar economic recovery.

At the time Hirohito was born, he was still considered a deity, though he renounced that status with Japan’s surrender.

Akihito has enjoyed widespread respect and sympathy as a politically neutral figurehead.

But his frequent expressions of hope that Japan has taken to heart lessons from World War II have been seen by many Japanese as a form of subtle resistance toward efforts by Prime Minister Shinzo Abe’s hawkish government to expand the country’s military role.

Oda first met the emperor when, as a junior high school student some 70 years ago, he tagged along with his elder brother to play tennis with Akihito on the palace grounds.

Oda had never played, and mostly just watched the others. When a palace driver came to pick them up afterward, Akihito insisted that Oda sit on his lap so all five of the boys could fit in the car.

“That day I wrote in my diary that an unforgettable thing had happened. I went to have tea sitting on the crown prince’s lap,” Oda said. “He was like ‘Let’s go!’ and very down-to-earth.”

“The emperor likes to socialize with people, though not in a glamorous way … He wants to really get to know people and learn from them. He doesn’t act like a typical monarch at all,” Oda said. “To me, he is more like a big brother.”

At the time Akihito was a bit chubby and tanned from swimming and other outdoor activities and his classmates affectionately called him “Chabu,” short for the cute, pig-shaped ceramic containers used to burn mosquito coils, Oda said.

As a child, Akihito was aware that living aloof from the rest of the world in his palace he had to study others to achieve his aims. Playing tennis allowed him to meet a variety of people from well-to-do families, including, most importantly, the young flour milling heiress who became his wife, Michiko Shoda.

“It may sound funny, but I believe tennis had the biggest influence in making the Emperor who he is,” said Oda. “He said it helped him gain confidence.”

Aug. 19, 1957, was the day of the famous “love match” between Michiko, who teamed up with a Canadian teenager, Bobby Doyle, to beat the Akihito-Oda pair on a court in the central Japanese resort town of Karuizawa. / gsg