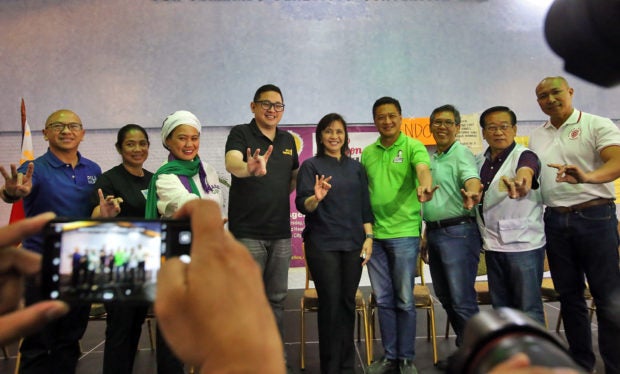 CEBU CITY — They may not be as popular as the other candidates. But the Otso Diretso opposition wannabes are optimistic to win in the May elections, said Vice President Leni Robredo who campaigned for them in Cebu on Thursday afternoon.

“Realistically, it is difficult because we don’t have the resources like the air time or in mobilizing people. But all these obstacles have been compensated by the passion of our volunteers who unwaveringly campaigned for our candidates,” she said in an interview at the Sacred Heart Center.

In a speech she delivered before around 500 supporters, Robredo encouraged the people to not be afraid of pro-administration and survey-leading senatorial candidates.

“Let us not be afraid of the strong because power is in the hands of every Filipino. If all do something, nothing is impossible,” she said.

“When we (Liberal Party) decided who to field as candidates, there were those who suggested choosing the popular, but many opposed. So we decided not to choose the popular but the good and those who deserve to be in the Senate,” she added.

Except for former Senator Mar Roxas who was attending to personal matters, all senatorial candidates of the opposition attended the event organized by different cause-oriented groups in Cebu.

Robredo, who in the 2016 elections emerged as a “surprise” winner in the vice presidential race, said everything is possible if all Filipinos come together to choose the good leaders of the country.

“I’ve experienced many elections, since the time of my husband, to my election in Congress in 2013, and the vice presidency in 2016. There were few resources but our volunteers tried their best to work for us,” she said.

“It’s true that our candidates are not popular but I assure you, if you get to know them, you will surely help them win,” she added.

On rumors that the 2022 presidential race will be between her and Davao City Mayor Sara Duterte, Robredo said: “If we consider the past elections, many things can still happen in a year. The 2016 elections was an example.”

“I think the presidency and vice presidency are destinies. I, for example, had no plans of seeking a national post but at the last minute, I did so and won. There were also those who prepared for a long time but were not successful,” she added.