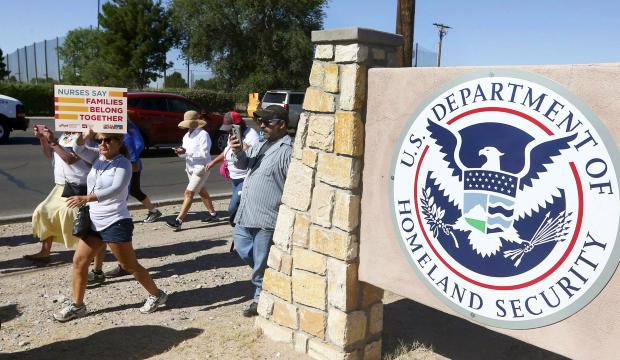 In this June 2018 file photo, protesters walk along Montana Avenue outside the El Paso Processing Center in El Paso, Texas. Nearly 50 Democratic lawmakers called for a watchdog investigation of U.S. Immigration and Customs Enforcement on Tuesday, Feb. 20, 2019, after the agency confirmed it had been force-feeding immigrant detainees on a hunger strike. On Thursday, all force-feeding at the detention center near the El Paso airport abruptly stopped after a U.S. district judge said the government had to stop involuntarily feeding two of the detained immigrants. (Photo by RUDY GUTIERREZ / The El Paso Times via AP)

Nearly 50 Democratic lawmakers called for a watchdog investigation of U.S. Immigration and Customs Enforcement on Tuesday after the agency confirmed it had been force-feeding immigrant detainees on a hunger strike.

Reporting by The Associated Press revealed late last month that nine Indian men who were refusing food at a Texas detention facility were being force-fed through nasal tubes against their will.

On Thursday, all force-feeding at the detention center near the El Paso airport abruptly stopped after a U.S. district judge said the government had to stop involuntarily feeding two of the detained immigrants.

The 49 lawmakers are calling for the Department of Homeland Security Office of Inspector General to investigate on-site conditions of ICE facilities and the policies surrounding the involuntary force-feeding of immigrant detainees. Earlier this month, the Geneva-based United National human rights office said that the United States could be violating the U.N. Convention Against Torture.

“We implore you to exercise your oversight responsibilities to make improving conditions at immigration detention facilities a top priority for ICE and ensure the humane treatment of detainees in federal custody,” said the letter spearheaded by Oregon Democratic Rep. Suzanne Bonamici and Texas Democratic Rep. Veronica Escobar, who toured the El Paso Processing Center and met with the men after the initial reports of the force-feeding. “These complaints reveal unequivocal abuses of power that violate the rights of detainees.”

ICE declined to comment directly on the request for an investigation Tuesday but said the agency has “a strict zero-tolerance policy for any kind of abusive or inappropriate behavior in its facilities.”

The agency said that if allegations of inappropriate behavior surfaced, they would be investigated by DHS Office of the Inspector General and ICE’s Office of Professional Responsibility.

“For their health and safety, ICE closely monitors the food and water intake of those detainees identified as being on a hunger strike,” the agency said in a statement. “ICE does not retaliate in any way against hunger strikers.”

The inspector general’s office did not immediately return a call or email seeking comment.

Detained immigrants have sporadically staged hunger strikes around the country for years, protesting conditions they face while seeking asylum.

ICE said Tuesday 13 immigrants from Cuba, India, Mexico and Nigeria held in detention facilities nationwide were refusing food, but none were being force-fed. That included 10 detainees at the El Paso Processing Center, one at the Irwin County Detention Center in Georgia, one at the Krome Service Processing Center in Florida, and one at the Central Arizona Correctional Center.

One hunger striker in El Paso, an asylum seeker from the Indian state of Punjab, had previously described the process as involving being dragged from his cell three times a day and strapped down on a bed as a group of people poured liquid into tubes inserted into his nose.

Force-feeding, which began under court order earlier this year, had not previously been reported. Before it began in El Paso, advocates said they weren’t aware it had happened before. /atm