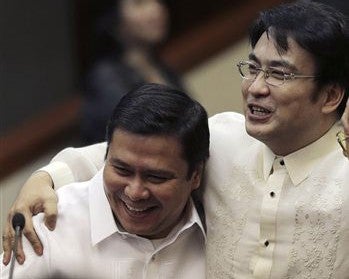 MANILA, Philippines — Senator  Manny Pacquiao on Wednesday vowed to  campaign for two former senators, who were not part of the PDP-Laban’s senatorial slate.

Estrada and Revilla, however, were not among the 12 senatorial candidates endorsed by PDP-Laban chair, President Rodrigo Duterte.

Senator Aqulino “Koko” Pimentel is the president of the PDP-Laban.

Asked about the corruption allegations against some of the candidates he is supporting, Pacquiao noted that they are still presumed innocent until  proven guilty.

Estrada and Revilla, along with former Senator Juan Poce Enrile, were accused  and jailed over the so-called “pork  barrel” scam.

Estrada and Enrile were out on bail while Revilla was already acquitted by  Sandiganbayan. /jpv